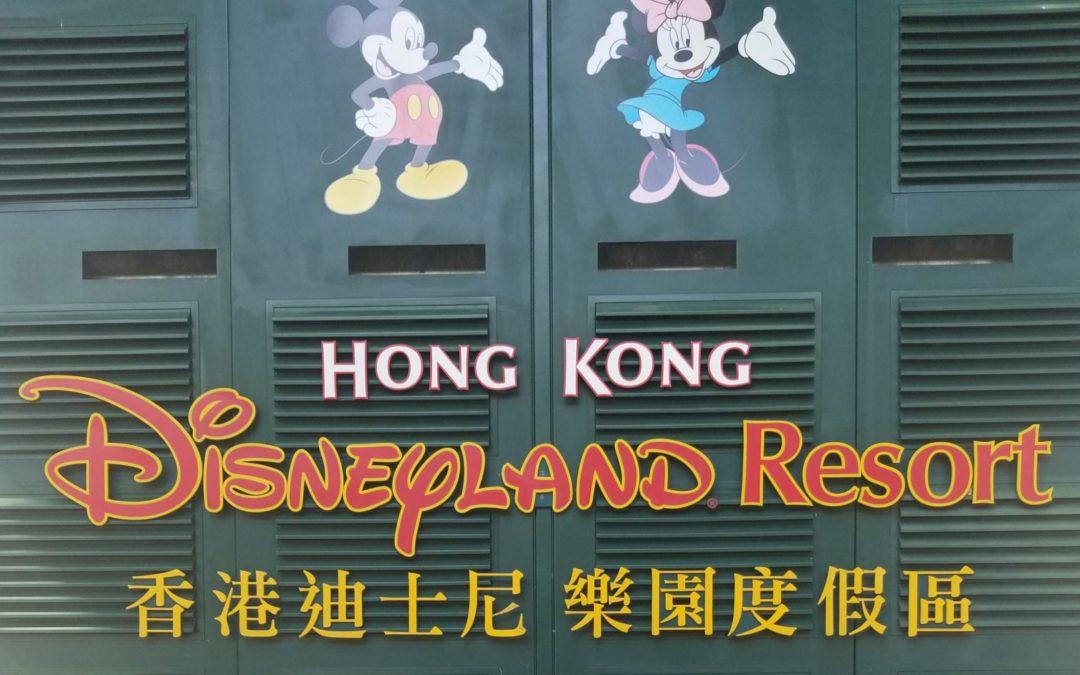 In my ‘How I Did It – Business Class to Thailand’ post, I showed you how I used 50,000 Alaska Airline miles for a business class award seat on Cathay Pacific from the US to Thailand.  One nice perk of using Alaska Airline miles is the ability to use a free stopover.  Basically this means I could stop in the middle of my award flight for however long I would like.  Our family took advantage of this perk to stop in Hong Kong for two nights on our way to Thailand so we could visit the Hong Kong Disneyland park.

Our Cathay Pacific flight arrived in Hong Kong just before 7:00pm local time.  After clearing immigration and grabbing our bags, I popped in my Google Fi sim card and ordered an Uber.  The Uber XL cost ~$27 for the ~10 minute ride to Disneyland. Hong Kong Disneyland has three resorts located at the property – Hong Kong Disneyland Hotel (which is similar to the Grand Floridian in Orlando), Disney’s Hollywood Hotel, and Disney’s Explorer’s Lodge (remember UP the movie?).  Disneyland Hotel was a little more expensive than the other two resorts when I searched for our dates.  We ended up staying the Explorer’s Lodge – because it’s the only one that has queen beds instead of full sized beds.  I hate full sized beds!

The Explorer’s Lodge was very well themed just like any other deluxe Disney resort you would encounter in Orlando. The lobby reminded me of Animal Kingdom lodge in Orlando. Here are a few photos of our ‘upgraded’ room: The grounds of the hotel were beautiful and well themed. The Explorer’s Lodge has 3 main restaurants:

Since we only had a day at the hotels, we dined at World of Color for breakfast and Chart Room Cafe for dinner.

For breakfast Dragon Wind was billed as the ‘character breakfast’ and was the most expensive at $38/adult.  We opted for the World of Color restaurant instead which is a partial buffet.  They give you a menu to order a hot dish (pancakes, Mickey waffles, eggs, etc) but there is also a buffet of fruit, pastries, etc.  With tip, our total was $128 (1003 HKD) for four.

Even though not advertised as a ‘character’ breakfast, Goofy showed up and took photos and met everyone. After we were finished at the park, we were pretty tired and didn’t feel like sitting down to dinner.  So we opted for the quick service/casual service restaurant Chart Room Cafe.  It served salads, pasta, flatbreads, and other entrees.  Simply order at the counter and they give you a beeper when your food is ready.  Our four entrees and drinks ended up being just under $70.

The park didn’t open until 10:00am, so there was plenty of time for breakfast.  There is a bus/shuttle stops at all three of the Hong Kong Disneyland Resorts to bring guests to the main park.  Our resort didn’t seem very busy, nor did the shuttle for pickup. We arrived about 9:30am, a half an hour before park opening. There is also a metro/train stop at the Disneyland entrance if you are not staying on property along with places to storage your luggage. A line formed at the entrance/security for the opening just like any other Disney park.

But there was a separate entrance for resort guests which was much much shorter. There is ‘main street’ lined with shops and restaurants just like the other parks with a very small castle at the end. Being a Disneyland hotel guests got you Fastpasses to two attractions.  The most popular attractions were Hyperspace Mountain and Iron Man Experience.  We headed to these first when we arrived at park opening.  There was no wait what so over and we didn’t even use the fast passes.

It was nice not having to fight crowds like at Orlando or California.  Here is a photo of ‘It’s A Small World’ at noon – notice what you don’t see?  People!  We had a boat on the ride to ourselves. We only tried a quick service lunch while in the park.  Be ready for some different food that you are used to! One thing to note is that not all of the food vendors accept credit cards – the larger places did, but the smaller carts with ice cream and drinks only accept cash.

This was our second visit to an international Disney park (Disneyland Paris in 2017, was our first).  Visiting an international Disney destination is always fun – most parks seem to be a combination of things you are used to in the US along with the international touches which make each park different.  The resort hotels are well themed just like you would expect but also carry the same expensive price tag.  You can easily visit the park in a single day and my favorite part of this visit was the low crowd levels.  To be able to walk right on to any ride with little to no wait was a dream come true – there was no need to even use the included fast passes.

Have you been to an international Disney park?  What did you like or dislike about it?