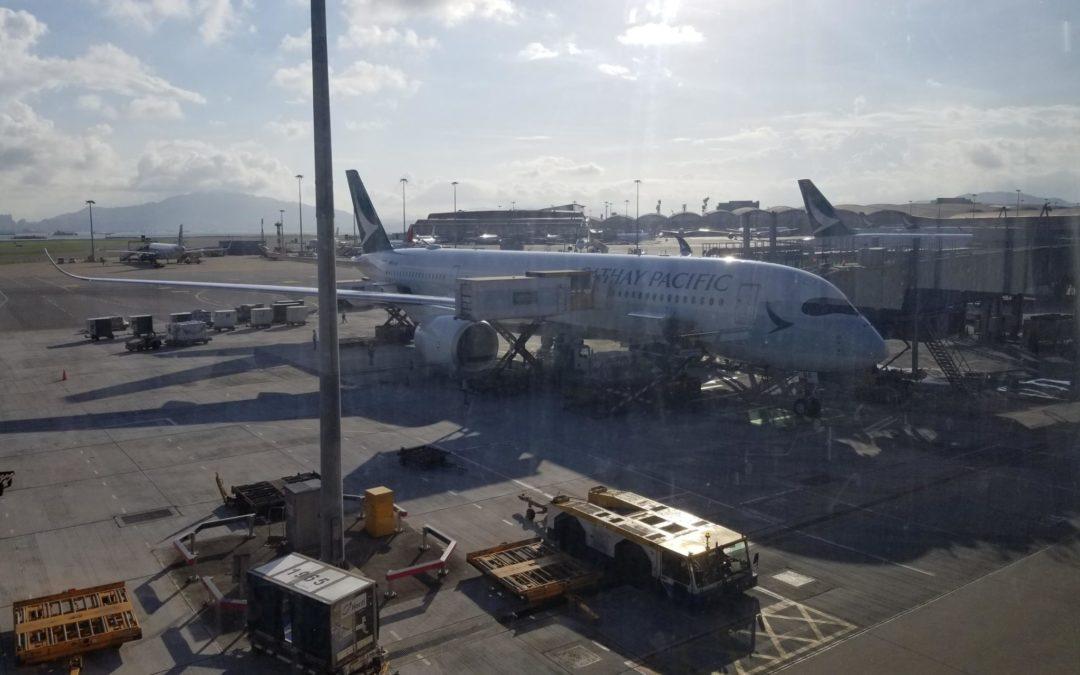 In my ‘How I Did It – Business Class to Thailand’ post, I showed how we were able to earn 200,000 Alaska Airline miles in order to fly my family of four in business class from New York to Thailand.  And no, it’s not 200,000 miles each but for all four tickets.  So how was it? AMAZING!

In order to get to Bangkok, our first flight flew from New York to Hong Kong.  We took advantage of Alaska’s Airline’s free stopover on award tickets and was able to visit Disneyland Hong Kong for a day before our second flight to Bangkok.  Here are the flight details:

After booking flights, I always head over to seatguru.com to check out the flight’s seating configuration and try to snag the best seats still available.  I had read many other reviews that Cathay Pacific utilizes a 1-2-1 reverse herringbone pattern in business class but I wasn’t totally sure what seats to select for my family of four.  I usually select seats near the back of the cabin, but not the very last row, with the goal that there will be very little traffic disturbing me when I’m trying to sleep since the restrooms and galley are located at the front of the cabin.

I ended up selecting 23D with my wife in 23G and our two kids aged 12 & 15 in 22K & 23K – this combination seemed to work out perfectly.  It’s true you have to lean forward just a bit if you want to see your seat mate, but it was not terribly isolated. I was also able to see both of my daughters in 23K & 22K if we both leaned forward a bit. I consider myself fairly tall at 6′-3″ so most airline seats always feel tight and cramped to me.  While the seat felt a little cramped and tight near my shoulders, it was plenty long enough where I couldn’t touch the end of the foot cubby – I know first world problems 🙂 There were noise cancelling headphones hidden inside a compartment along with the remote control and power outlet.  The compartment was a good place to store my phone. The screen at the seat was hinged and swung open so it was in line with the seat instead of being tucked away in the seat in front.  Although I wasn’t sure if this had to be stowed in position for take off and landing – other people had left it in the open position and the flight attendants didn’t ask them to push it back in place so I kept it open.

Menus were handed out with the following drink lists.  I started with champagne before switching to the Merlot/Cabernet blend for dinner. Since we left JFK in the afternoon, a four course lunch was served as the first meal. The starter course was brought out together on a tray.  The salad was basic but the duck was very tasty.  Even my picky daughter ate the duck. For my main course I selected the beef fillet.  While it doesn’t look very appetizing in the photo below, it was actually fairly good especially with the miso glaze sauce.  Looking back the menu it was supposed to be accompanied by ‘sweet corn mousseline’, I couldn’t taste any corn and thought it was just mashed potatoes instead.  The vegetables were also crisp and not soggy. Next came the cheese and fruit course – I opted for a taste of each of the cheeses from the cart. Finally dessert was served, I opted for the the apple crumble and with a port dessert wine.  Both were really good along with the chocolate handed out to all. After dessert is when I passed out from being so stuffed and with all of the wine.  I thought I took photos of the amenity kit and the fully reclined lie-flat seat, but they’ve gone missing.  No pajamas (like on Qatar) were handed out, but there were slippers and socks provided along with a fairly heavy blanket and nice sized pillow.

Snacks were available throughout the flight (burger, soup, ice cream) if you were still hungry.  After ~6 hours of sleep and a few movies, were were a few hours from Hong Kong when they began dinner service. A fruit course was served first which was fine but nothing special. Since I had the beef for lunch, I opted for the chicken for dinner.  The flight attendant seemed relieved when I ordered the chicken as I was the first to order it – the beef stir fry was very popular.  Again the entree did not look very appetizing but sure enough was very good even with the rubbery skin. Dinner ended with the chocolate blueberry cake and a coffee – again served from a cart. I am absolutely shocked at the value of this redemption.  Cathay Pacific is currently selling one way business class seats from New York to Bangkok for almost $5,000 and I was able to use only 50,000 Alaska Airline miles and $27 in taxes to fly 18 hours in a nice lie-flat private seat with good food and great service.  This is why I advise people to save their points for business class redemptions, I’m not sure I could have survived the 15 hour flight in economy.

I can’t say enough how welcoming and friendly the flight attendants were.  I would fly Cathay Pacific again in an instant.

Have you ever flown Cathay Pacific?  What did you think?