I finally pulled the trigger on cashing in my stash of Marriott points for the elusive 5 Night Travel Package!

With my Southwest Companion pass (allows my ‘companion’ to fly free on any flight I am traveling on) expiring on December 31, 2016,  I was researching ways to obtain another 110,000 southwest points in early 2017 so I could obtain the companion pass again for the rest of 2017 and all of 2018.  The easiest way seemed to purchase a Marriott Travel package which would give me the required 110,000 Southwest miles in addition to a 7 night Marriott stay.

Basically a Marriott Travel Package is cashing in a bunch of Marriott points for a 7 night hotel stay along with a certain amount of airline miles on different participating airlines.  The amount of points required varies by which airline you select along with quantity of airline miles and the category Marriott.  Here is a full listing of all of the different options: http://www.marriott.com/rewards/usepoints/morepack.mi

Here is the package I was interested in since 110,000 Rapid Rewards is needed to obtain the Southwest Companion pass.  You are also allowed to upgrade your category hotel by paying the difference in points so it’s best to get the lowest category until you have a specific redemption in mind. 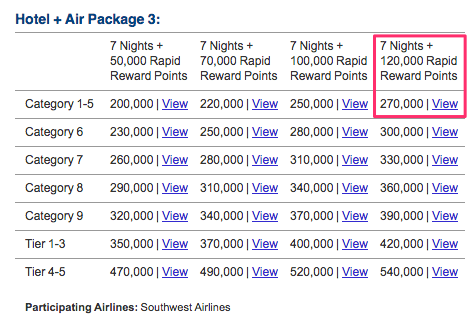 In late October 2016, both my wife and I applied for the Chase Marriott Business credit cards that had an 80,000 sign up bonus after spending $3,000 in 3 months.  This would give us 166,000 of the required 270,000 points required for the package.  For the remaining 104,000 points, I transferred 35,000 Starwood points to 105,000 Marriott points (last year, Marriott purchased Starwood and started to combine programs by allowing transfers between the programs at a ratio of 1 Starwood point to 3 Marriott points).

January arrived with some bad news – Southwest closed the ‘loophole’ that allowed points transferred from hotels to count towards the 110,000 rapid reward point requirement for the companion pass.  This caused a bid uproar in the miles and points community and Southwest actually reversed their decision and is allowing hotel points to count for 3 months until March 31st, 2017.

Good for Southwest making this temporary change back.

While researching all of the above, I learned from the FrequentMiler that Marriott also has unadvertised 5 Night packages that are intended for Marriott Vacation Club owners.  5 night packages are basically the same as 7 night packages except they cost less points because there are 2 less nights included.

Greg has a chart of all of the different point breakdowns for the 5 night package here.

According to the comments section in Greg’s post, people had luck getting the 5 night packages in January & February 2016, then Marriott started denying people the package unless they were Vacation Club owners.  Comments continued to indicate people being denied the 5 Night package through the rest of 2016 and even into January 2017.

Finally some comments in February 2017, people indicated some success in obtaining the 5 night packages but it took multiple calls to different reps.

I made my call today, but actually called the Marriott in Europe and had success.  I used Skype to make the internation call and said I would like to redeem my points for a 5 night travel package in a category 1-5 with Southwest points.  The rep quoted me 235,000 points.

I quickly transferred more Starwood points to my Marriott account at a 1:3 ratio until I had 235,000 points.  I called back the same guy answered, he recognized me when my info popped up on his screen.  I told him that I transferred some more points so I had enough, he double checked and processed the 5 night award for me.  Took a few minutes – very easy.

I asked him what the chances were that I would get him on the call back thinking it was a large call center.  He knew I was calling from America and said my call to the UK was transferred to him in Ireland and he was only working with one other person so I had a 50-50 chance that he would pickup.

So I’m not sure if either:

Don’t forget you have until March 31, 2017 if you would like to purchase the Marriott Travel Night packages that allow the Southwest points to count towards the Companion Pass.