Head to Head: ‘The Bikini Airline’ VietJet vs ‘The Boutique Airline” Bangkok Airways 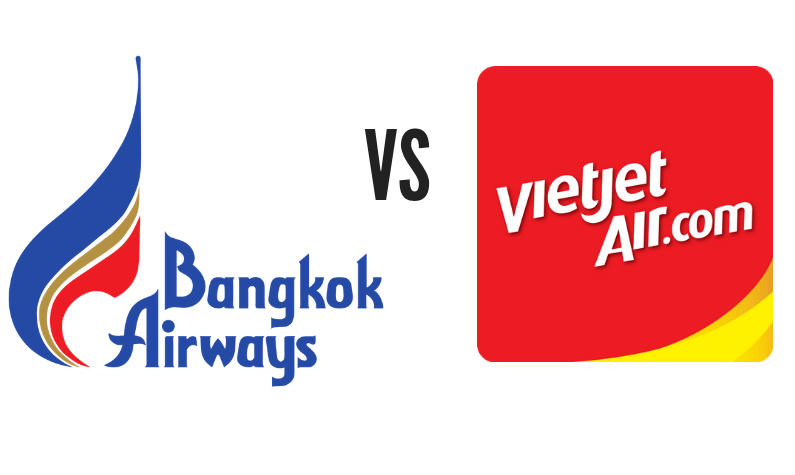 The next installment of my Thailand trip report involves the review of two different domestic airlines in Thailand.  VietJet Air is Vietnam’s largest budget airline – you may have heard about then in the news for having bikini clad flight attendants on a few special flights.  We also flew Bangkok Airways which bills itself as ‘Asia’s Boutique Airline’.  I thought it would be fun to do a heads to heads comparison of the two.

Please remember this head to head comparison is based upon a single VietJet Air flight and three individual Bangkok Airways flights so I only have a limited amount of flights to compare.  Here goes:

When I started my search for our first flight from Bangkok to Chiang Mai, I was pleasantly surprised at the how cheap the hour plus long flights were.  Below are the current ticket prices for flights from BKK-CNX next summer.  Now I had read that VietJet Air was a low cost budget carrier that charged extra for bags, seats, etc – just like Spirit airlines.  I also new that Bangkok Airways was more like Southwest in that it offered a free checked bag.  So before I got too excited, I dug in to see how much bags and seats assignments would cost on VietJet. VietJet’s website was very easy to use.  The cost of the flight on VietJet’s site was exactly as Google had displayed ($12 base fare + taxes = $19).  At the time I booked all of the ‘Promo’ fares were  listed as sold out on the website – I’m guessing it was even lower than the $12 ‘Eco’ fare that I booked.  There was also a ‘SkyBoss’ fare which was $122.

After selecting the ‘Eco’ fare and continuing the booking, I was brought me to the seat assignment screen.  Now while the first two rows were not available to book (available only if you had selected a ‘SkyBoss’ fare which allows a seat selection for free),  You had three different options – for $4 you could select a Premium Seat (rows 3-5) or an Exit Row.  For $1.80 you could select a purple ‘Front Seat’ and for $1.40 you could select a ‘Normal’ green seat. Now you actually don’t have to select a seat, they will automatically assign you one at check in – but since we were flying as a family, I splurged $16 and got four of the Premium Seats in the 3rd row.  I found out no one had purchased the ‘SkyBoss’ fares are the first and second rows were empty.  I also found out we were the only ones to purchase the $4 Premium seats as no one was next to me in row 3 and rows 4 & 5 were empty also. You could also purchase a meal – but we did not. So how much did our four VietJet Air tickets from Bangkok to Chiang Mai cost with bag fees and premium seat assignments?  $131 – I couldn’t believe how cheap it was.  I ended up booking the flights as with the extras it was still less expensive that Thai and Bangkok Airways.  Here is our actual cost breakdown. For comparison – Bangkok Airways allows you one 20 kg check bagged included with your economy airfare.  You can then purchase additional baggage weight in 5 kg increments.   Tip – if you join Bangkok Airways frequent flyer program – you are automatically upgraded to a free 25 kg checked bag. Bangkok Airways also does NOT charge for a seat selection but the first five rows and exit rows are not available.  Purchasing a more expensive ‘Web Freedom’ fare will open up rows 2-5 for you to choose from but Bangkok Airways saves the exit rows and first row for their premium frequent flyers until a few hours before departure. Needless to say, VietJet Air tends to have the lowest cost but you need to factor in all of the extras.  Bangkok Airways was the least expensive for our flights to and from the island of Ko Samui.

Advantage – Depends on destination but don’t forget to factor in extras.

With your Bangkok Airways ticket (even the economy fares) you get access to Bangkok Airways lounges for free.  Some are nicer (Bangkok) than others (Chiang Mai).  It was nice to be able to get some snacks and a drink along with a more comfy seat and have wifi.  With our VietJet flight there was no lounge access. I’m a fairly tall guy (6′-2″) so seat size is important to me.  I didn’t notice much of a difference in knee/leg room between the two airlines. I did notice that the VietJet flight was definitely a nicer and newer airplane.  The three flights on Bangkok Airways seemed to be on older aircraft – the seats were worn and the airplane just looked ‘tired’.

Since I only flew on one VietJet flight, I checked the average age of the airline’s planes when I got home to see if I was just lucky getting a newer aircraft.  It turns out VietJet does have much newer airplanes – Airbus A320s & A321s with an average age of less than 3 years.   While Bangkok Airways flies A319s, A320s, & the twin prop planes with an average fleet age over 10 years. Like mentioned above, you could pre order a meal when you were purchasing your tickets with VietJet.  If you did not pre-purchase, you could still pay for snacks and drinks on board which were reasonably priced ($1 USD = ~33 Thai Baht).  We didn’t order anything – we just weren’t hungry and it was such a short flight. Bangkok Airways on the other hand provides a hot meal with every single flight with no additional cost.  Even with their short 50 minute flights, a hot meal is served to everyone.  Below was our meal on the hour long flight from Chiang Mai to Bangkok.  The noodles and chicken dish was actually pretty good.  It was served with fruit and a water bottle.  Tea was also provided. Now you would think Bangkok Airways would automatically have the advantage with a free meal being served on all flights right?  But I’m actually in favor of VietJet’s model and let me tell you why.

Like I mentioned above, we opted to take a one stop flight from Chiang Mai to Ko Samui instead of the nonstop since we saved ~$400.  We started in the free lounge at Chiang Mai and got a few snacks.  We then boarded the hour flight and had a meal which was decent (pictured above).  We then had an approximate hour layover in Bangkok where we had access to the nicer lounge.  We had a few more snacks in this lounge.  We then boarded the second hour long flight from Bangkok to Ko Samui and was served another meal.  The second meal was fish which looked disgusting and didn’t even touch.

It ended up being way to much food – I didn’t need two meals in a span of 3 hours while having lounge snacks.  While the food didn’t cost anything extra – everyone ends up paying for the food in the form on higher fares.  I’m sure a lot of food ends up being wasted also.  It also clogged up the aisle with the food cart so it was harder to use the restroom.

With VietJet you can chose a hot dish of your liking ahead of time or buy snacks of your choice and not have to pay for meals that you may not eat or want in the form of a higher fare.

A found the crew of Bangkok Airways to be friendlier during the brief interactions I had with them during the meal service.  The VietJet Air crew on the other hand was fine although a little snippy with me at the beginning – apparently having your phone/ipad out during take off is a big no-no in Asia.  And no there were no bikinis on my VietJet Air flight 🙁

Both airlines had easy and on time boarding.  And all flights arrived on time.  I’m sure each of them has hiccups occasionally but I’ll call this a tie

This was a much closer matchup than I originally thought it would be.  The boarding and flight arrivals were equal.  While VietJet had the nicer and newer aircraft, Bangkok Airways had the friendly crew – so those two items cancel each other out.

Bangkok Airways provides lounge access, a hot meal, and a checked bag with all of their fares while everything was extra on VietJet.  So after adding in the cost of a checked bag and a seat assignment (since I personally would be checking a bag and would want to guaranteed to be sitting next to my traveler partners) to my VietJet fare, I think I would be willing to pay up to a $10 premium to fly Bangkok Airways instead of VietJet.

I think $10 is about the value of the lounge access and the free hot meal (considering I might not like the hot dish, at least I would have a bottle of water and some fruit).

Have you flown either of these airlines?  How much of a premium would you pay to fly Bangkok Airways?