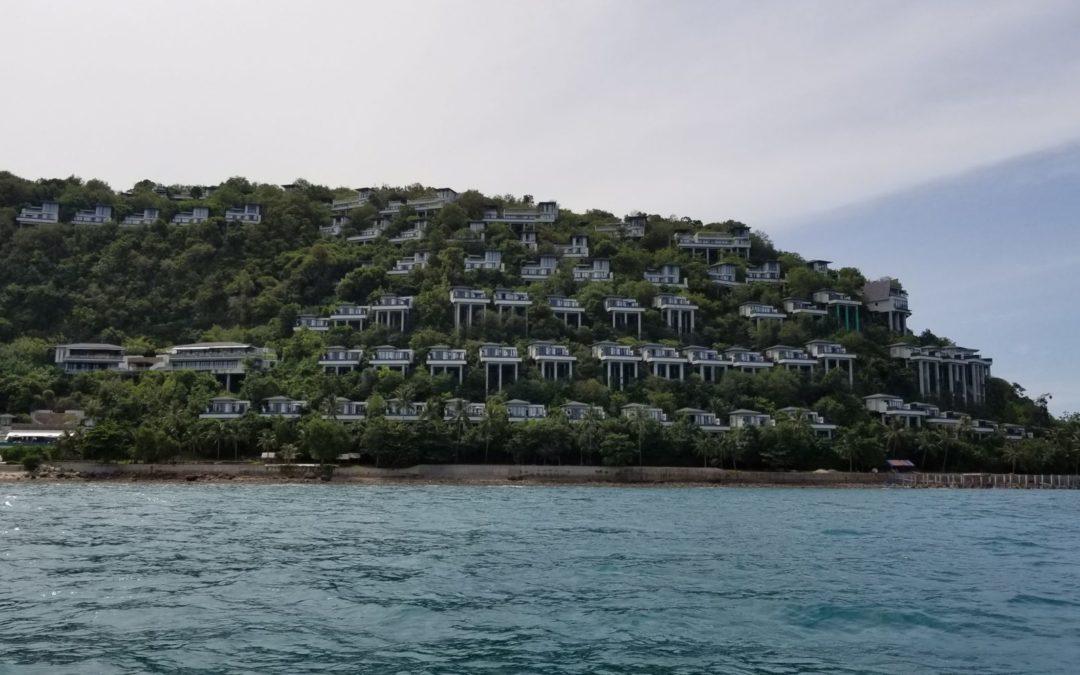 After spending 5 nights in Chiang Mai, our next destination was the island of Koh Samui island in southern Thailand for some rest and relaxation at the Conrad Koh Samui.

While our flight from Bangkok to Chiang Mai was dirt cheap – only $32/each, flights to Koh Samui (USM) were much more expensive.  I’m guessing because Koh Samui’s airport is privately owned and was built by Bangkok Airways. The Conrad Koh Samui is on the opposite side of the island from the airport.  But it’s a small island and only took about an hour to get there by car.

They texted us a map of the meeting area at the airport and confirmed with me the day before.  A 9 person van was waiting for us and away we went. The Conrad Koh Samui was built into the side of a mountain.  The last mile of the trip brings up a very steep hill to the top where the arrival area is.

Porters unloaded our luggage while we were brought to the arrival lounge to be checked in.  We immediately went to the balcony area to get a better view of this amazing property.

While our passports and credit card were processed we were given cool towels and a drink. We were given an overview of the property – where and what time breakfast was, happy hour locations, the spa hours, etc.  We also met the Director of Operations – Marco Araujo who welcomed us. A golf cart was waiting to drive us to our villa.

Three weeks prior to our arrival, we were contacted by the Conrad asking us to fill out a form with all of our guests names, expected time of arrival, if we were celebrating anything, what time we preferred make up and turn down service – even what type of pillows we wanted!

After we emailed our preference sheet, the Conrad emailed me back recommending we upgrade to a two bedroom villa for 10,000 Baht (~$305) per night extra.  They emailed us a brochure of the two bedroom – and all I can say is WOW!  The 2 bedroom villa is spread over two levels and has more than 3000 SF of space.  I definitely wanted the two bedroom but thought it was a little too expensive.  There is a 10% service charge and ~9% tax on top of everything so I thought the 10,000 baht per night up charge would amount to ~$1500.

They responded with the following:

So I didn’t realize that the initial 10,000 baht per night up charge already included the ~19% service charge and tax.  But they graciously offered me the upgrade for 8,000 baht per night which amount to just under $1000 for the four night stay which I happily accepted.

Immediately after entering the front door, we were greeted with our very own private court yard with glass railing.

To the left was the second entrance door which brings you to the inside top level of the villa.  The top level houses the living room, kitchenette, dining room table, along with a half bathroom.

Down the stairs to the lower level, the master bedroom was located on the left side of the hallway. The second bedroom with separate bathroom was located on the right side of the lower level.

Both bedrooms had sliding glass doors to the huge patio area and infinity pool.

For a full video tour of the villa – check out my youtube video:

Since each villa has it’s own private infinity pool, the main pool located near the beach of the resort hardly ever have anyone at it.

The beach was probably the most disappointing part of the resort.

There were some hammocks and floating platforms in the water which were fun to use.

There was also another seating area just above the beach – it looked like a good idea – but the seats and overhand netting wasn’t very comfortable.

There also was a few other lounge areas as well as a small shop, library, and gym.

But we usually just hung out at our villa’s pool.

Breakfast which was included for Gold & Diamond members was served from 7am to 10:30am each morning at Zest.  There was both indoor and outdoor seating with beautiful views. We usually ate breakfast late so we weren’t really hungry for lunch.

For dinners, we ended up trying 3 of the 4 main restaurants and also got room service one night.

Azure is the most casual of the restaurants.  It’s located off the main pool area.  We ate here the first night since we arrived in the afternoon and were tired from traveling all day.  It’s mainly burgers, pizzas, salads, etc – here is the menu.

Our bill came to ~$150 for our family of four.  This included a couple mojitos.

The second night we tried Zest.  This is the same place we had breakfast at each night.  It was definitely much nicer than Azure.  The menu was mostly traditional Thai dishes but also had a good selection of different pasta dishes that my daughters liked.  Menu located here.

This dinner was actually less expensive than Azure (~$125) probably because we had dinner right after the Manager’s Cocktail reception that had appetizers.  They also gave us a ‘to go’ glass of wine that we brought into dinner.

Our third night we opted for Jahn which Marco (Director of Operations) recommended we try as it was rated the best restaurant on the island.  Jahn only has 28 seats so reservations were required along with a dress code. The menu is geared towards a contemporary Thai cuisine with a focus on local flavors and high quality ingredients.

The food was presently beautifully as you would find at a fine dining restaurant.  For my main course, I had the KAI OOB FANG which was described as a sous-vide chicken breast with herbs, fresh wheat grain served with a smoky single malt whisky.  It was very good but not really filling.

We even ended with dinner with black ivory elephant coffee.  It’s actually processed by elephants (yes, they eat the beans and the beans are then collected a few days later) and brewed with this fancy contraption below.

Not sure I’d get this $40 coffee again, but glad I tried it.

Needless to say, this was by far the most expensive dinner coming in just under $400.  So did I think it was worth it?  No.  I’m all for quality over quantity.  The food was very good but we all left hungry even after having an appetizer, entree, and a couple of shared desserts.

There was an activity schedule which included a couple of different activities each morning and a couple in the afternoon.  Activities rotated on a daily basis and included such things as:  Thai Chi, Thai Boxing, Kite Flying, Yoga, and Bocce (but with coconuts).  Unfortunately we did not partake in any of these activities.

Since the beach area at the Conrad is not very good, they offer two separate beach excursions if you are staying 4 nights or longer at the resort.  First there is a shuttle bus to a local beach (Lamai Beach) that left the resort at 11am, 2pm, or 5pm.

There is also a complimentary boat excursion to an nearby island that we signed up for.  Since the boat only holds 8 people you had to sign up in advance for this – it also had three departures per day (10:00am, 11:45am, or 1:45pm).

The excursion lasted about an hour and a half and had two stops.  First on the way to the beach island, we stopped for 20-30 minutes of snorkeling at a nearby reef.  Then we headed for a very small island that had a nice beach and a small hut for snacks/drinks.

The island had ‘swimming pigs’ like in the Bahamas.  We had fun feeding the wild pigs.

Between 9-11am and 7-9pm there were a few special spa promotions going on.  We took advantage of one of them our last night.  The ‘Harmony Extreme’ included a couple’s fresh herbal steam, real aroma massage, and a Conrad mini facial for 8,900 baht.  After service charge, tax, gratuity, it ended up being ~$320.

The spa was located at the end of the property about half way up the mountain and offered amazing sunset views.  Our appointment was right at 7pm.

I have been a Hilton Honors Gold member for a while thanks to having the American Express Platinum card.  About a month before our trip, Hilton was offering to match your status of other programs.  Luckily I had leveraged my MGM Platinum status into Wyndham’s highest level Diamond status right before Hilton made this announcement.  So I was able to match Wyndham Diamond status to Hilton’s Diamond status before the trip.

Even though I booked this stay with free weekend certificates and points, our folio ended up at ~$2000 at this resort.  Most of the cost was from the two bedroom villa upgrade charge ($1000), the spa, and the restaurants/dining.

The absolute best thing about our stay (other than the amazing two bedroom villa) was the staff – top notch!  Every single person we encounter was not only professional but very kind and welcoming (even better than the Park Hyatt Maldives).

Have you been to Conrad Koh Samui?  Or another place at Koh Samui – what did you think?

Pin It for Later