I don’t like hoarding points so I’m always earning and burning them.  I also find using miles and points and maximizing redemptions is much more difficult than earning them.  I hope this post helps new travel hackers learn a new way to redeem miles.

In May of last year, for a short period of time there was a link available to sign up for the American Express Personal Platinum card that offered 100,000 Membership Rewards points for spending $3000 in 90 days.  Since American Express only allows you to receive a welcome offer/bonus once per lifetime, it’s best to make sure you only sign up for the card when it offers the highest ever bonus.  I quickly met the minimum spending requirement and by July had an extra 103,000 Membership Rewards points.

In August I learned of a mistake rate for the Hyatt Regency Paris Étoile.  Rooms were going for just 3,000 Hyatt points + $20 per night and included access to the Regency Club with complimentary breakfast and snacks.  This amazing deal only lasted a few hours but I was able to book a week in April 2017 and a week in the summer.

The hotel has been under renovation, here is a rendering of the renovated room: 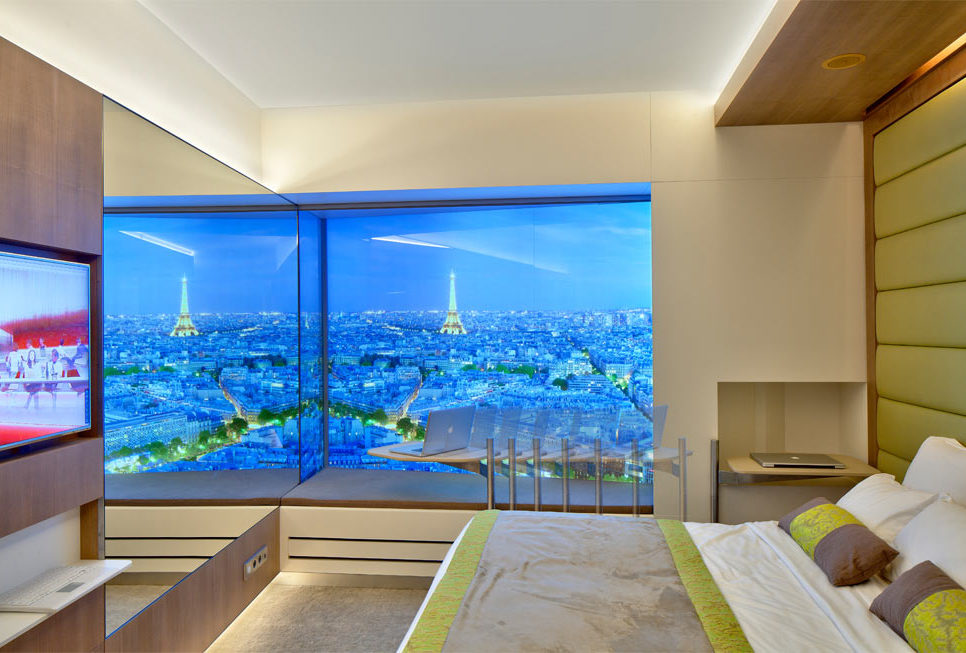 Now I just needed to get there, and hopefully get there in comfort.  While American Express has over a dozen airline travel partners which you are able to transfer Membership Rewards to, one of the best values for travel to Europe is ANA Airlines.  Never heard of ANA Airlines?  It’s actually one of Japan’s largest airline. 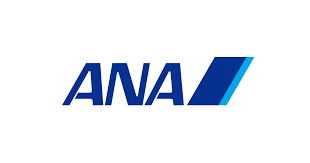 If you are really new at travel hacking you may be scratching your head right now asking yourself how is a Japanese airline going to get me from the US to Europe?  The key is airline alliances.  ANA is a member of the ‘Star Alliance’ which includes 28 airlines throughout the world that work together to provide you access to many more destinations that a single airline could provide.

Even though ANA is based in Japan, when you book a ticket with them, you are able to fly on any of the 28 Star Alliance airlines.  United, Austrian, Lufthansa, and Brussels Airlines are also members of the Star Alliance – so even though we are using a Japanese Airline’s frequent flier program, we can redeem the miles on any Star Alliance member.

Booking a roundtrip flight from the US to Europe in a lie-flat business class seat only costs 88,000 ANA miles.  Economy is 55,000 miles roundtrip.

If you were to book that same business class flight using other airlines miles you would spend:

How to Book It

Before transferring your Amex Membership Reward points to ANA Airlines, you want to make sure there is award space for your travel dates.  As an example, let’s say we live in Washington DC and want to visit Germany and Spain in the next few months.

Let’s search for award space from Washington to Frankfurt, Germany first.  To do this, head over to United Airlines website and perform an award search – it’s more user friendly than ANA’s website.   Be sure to check the ‘Search for award travel’ box. 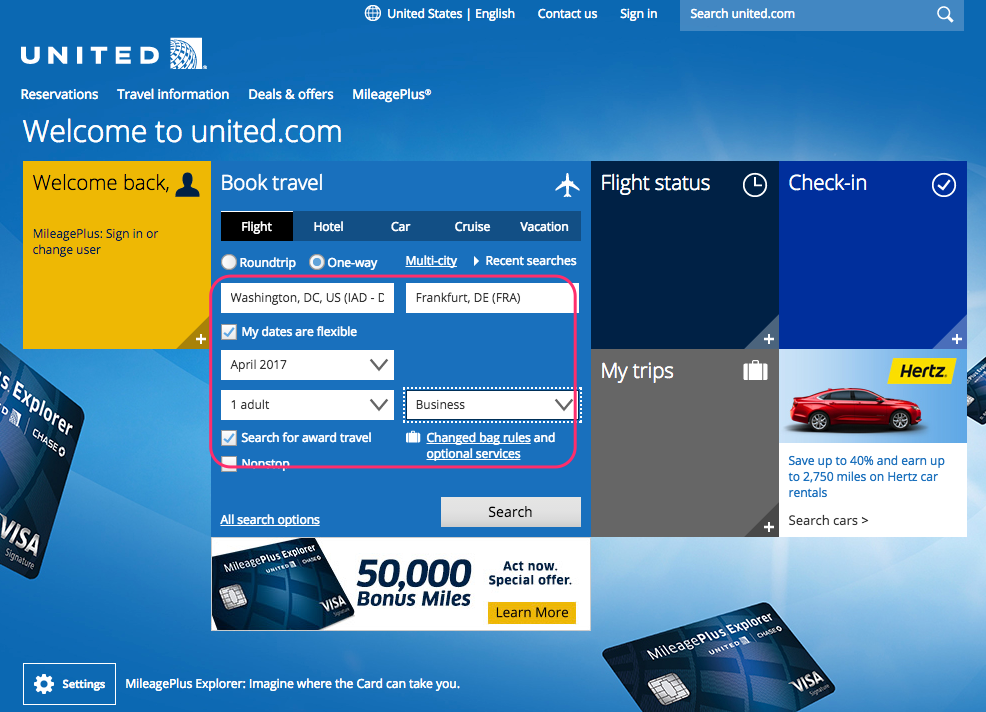 Here are the results we get.  All dates with the …. shown have premium class award space available.  We will need to reference the Business Saver column since that is the award space that ANA and other Star Alliance partners are able to book. Don’t worry that the miles shown is 57,500 – that’s what United charges, we are just searching for award space on United, then booking at ANA with their miles. 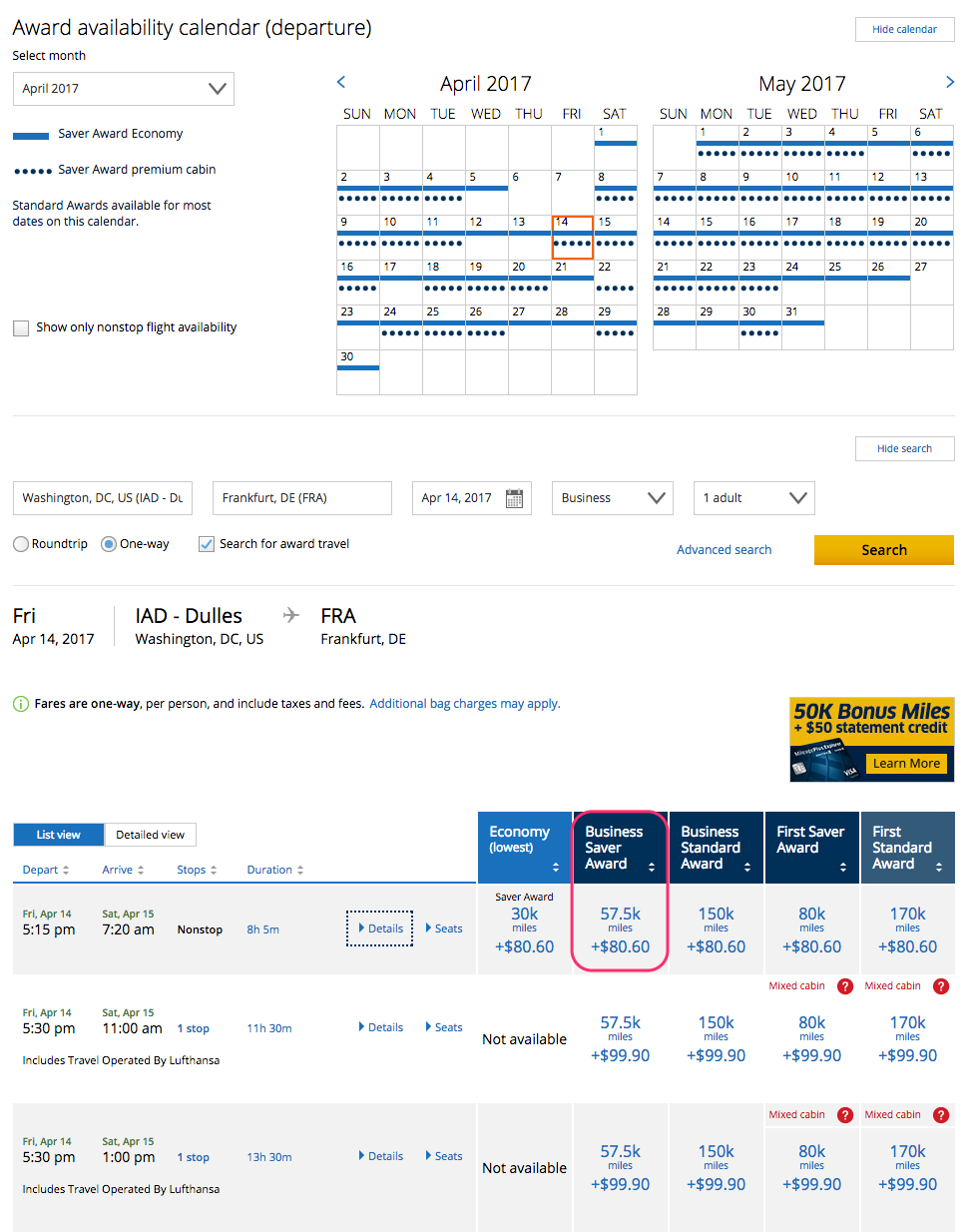 Let’s select the 5:15pm nonstop flight on April 14th.  We would perform the same type of search for return flights from Frankfurt back to Washington DC.  After finding our desired return flights, we would head over to ANA’s website to book this award ticket.

But let’s make this better, here’s two travel hacks I want to share with you that I took advantage of – stopovers and open jaws.  ANA allows both!

What is an Open Jaw

An open jaw is arriving in one city but departing another city on the return trip. In our example, we are flying from Washington DC to Frankfurt.  We travel through Germany for a week before heading over to Spain.

Because ANA allows an open jaw, we don’t have to go back to Frankfurt to return back to Washington, we can leave directly from Spain.  Note – you are responsible for the cost of travel between Frankfurt and Barcelona – you could take the train, a short flight, or even drive.

So let’s search for flights from Barcelona to Washington DC, here are the results for April 25th: 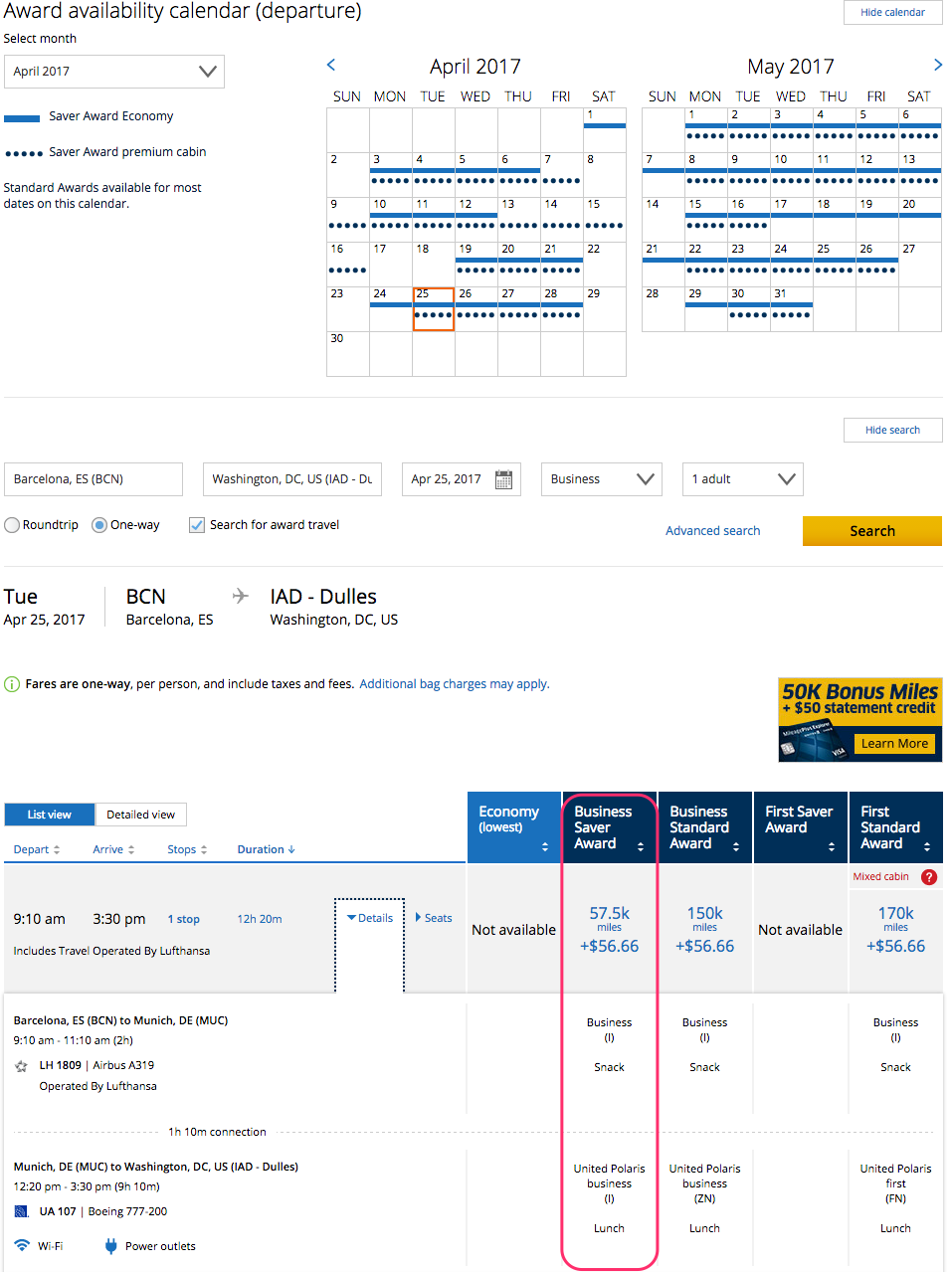 Not so fast, here is the second travel hack I want to share with you.

What is a Stopover

Before I explain a stopover, I want to explain what a layover is.  It’s up to a 4 hour connection in an airport on a domestic flight or up to 24 hours connection on an international flight.  In our example above, we have a 70 minute layover/connection in Munich on our flight from Barcelona to Washington DC.

Let’s search for one way award travel in June from DC to Columbia, here are the results: 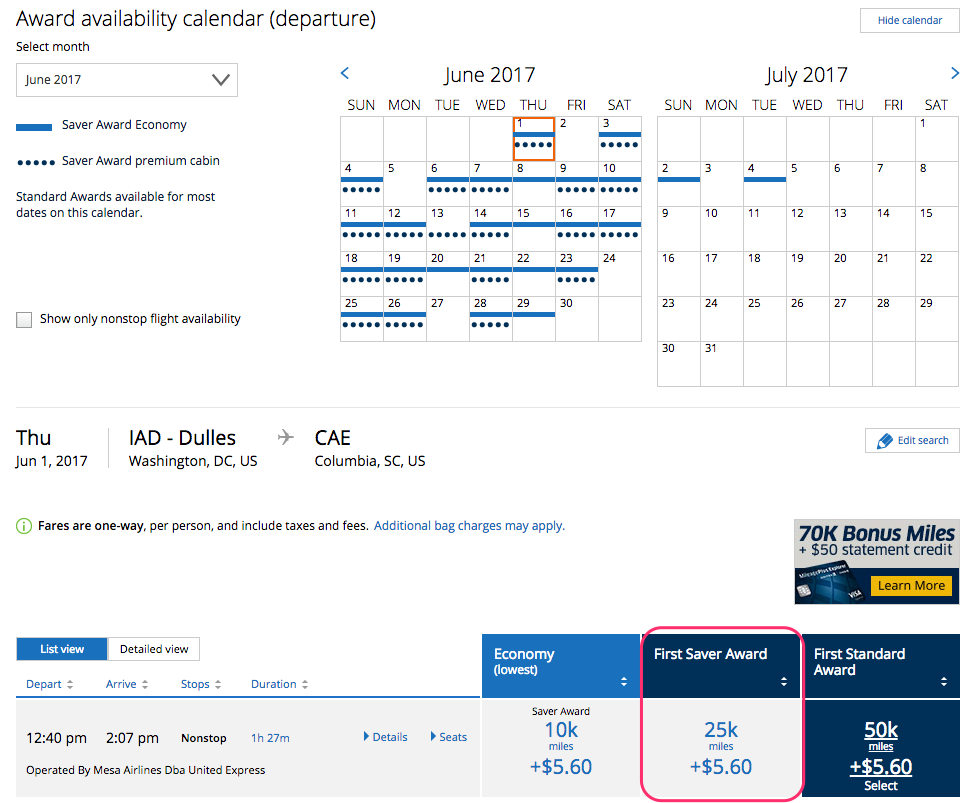 One other thing to note the stopover can occur during your trip also.  In our example, we could have flew from Washington to Frankfurt (stopover for 4 days) then continue on to Paris.  We could then travel by train to Barcelona, making Barcelona the open jaw and flying back to Washington through Munich.  Since we used Frankfurt as our stopover, we couldn’t add the Washington to Columbia leg in June as ANA only allows one stopover.

So now we have our full itinerary, it looks like this:

After creating a frequent flier account with ANA, let’s do an award search for the dates and destinations above.  Here is the step by step process.  First click on ‘Award Booking’. 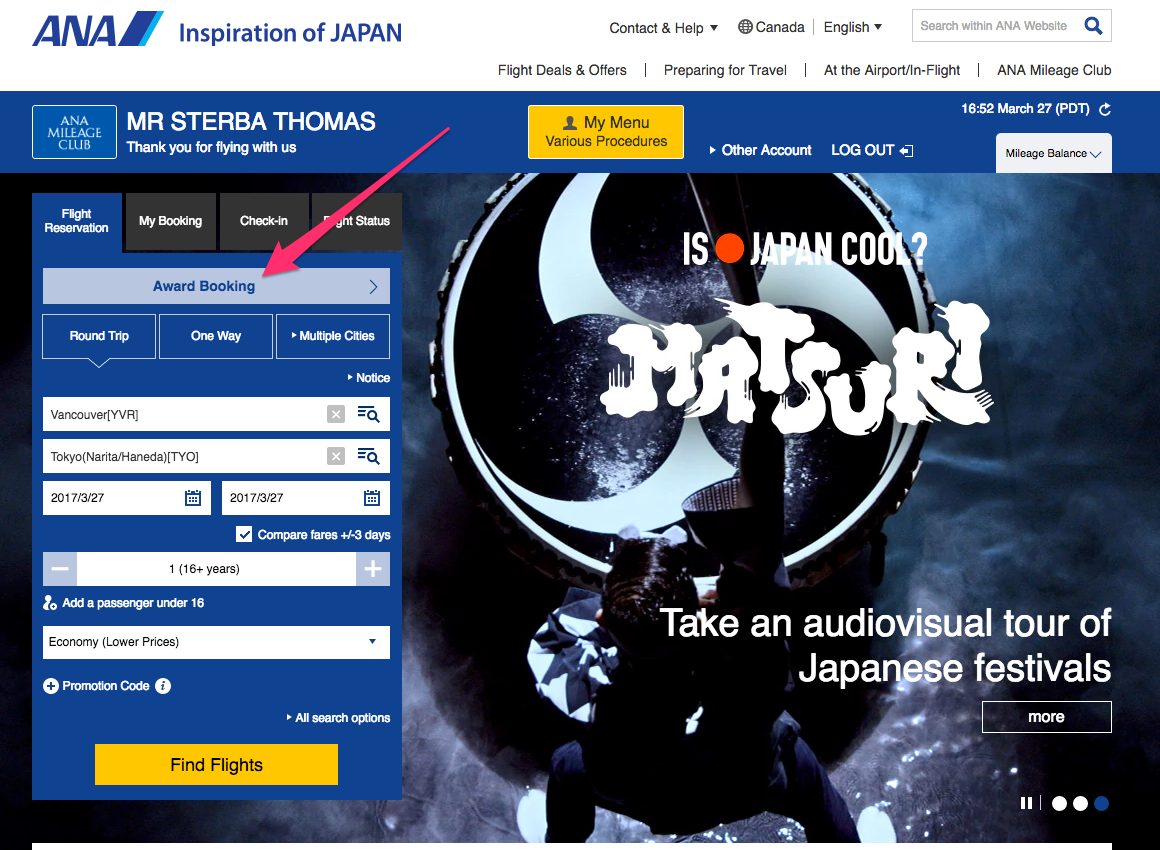 Next enter be sure you are on ‘Award Reservation’ and ‘Multiple cities/Mixed classes’ tab since we are using open jaws and stopovers.  Enter all of the previous dates and airports we found award space on at United.com.  Be sure to even include the layover in Munich.  Here’s what the search should look like all filled out.  Next hit the ‘Search’ button. 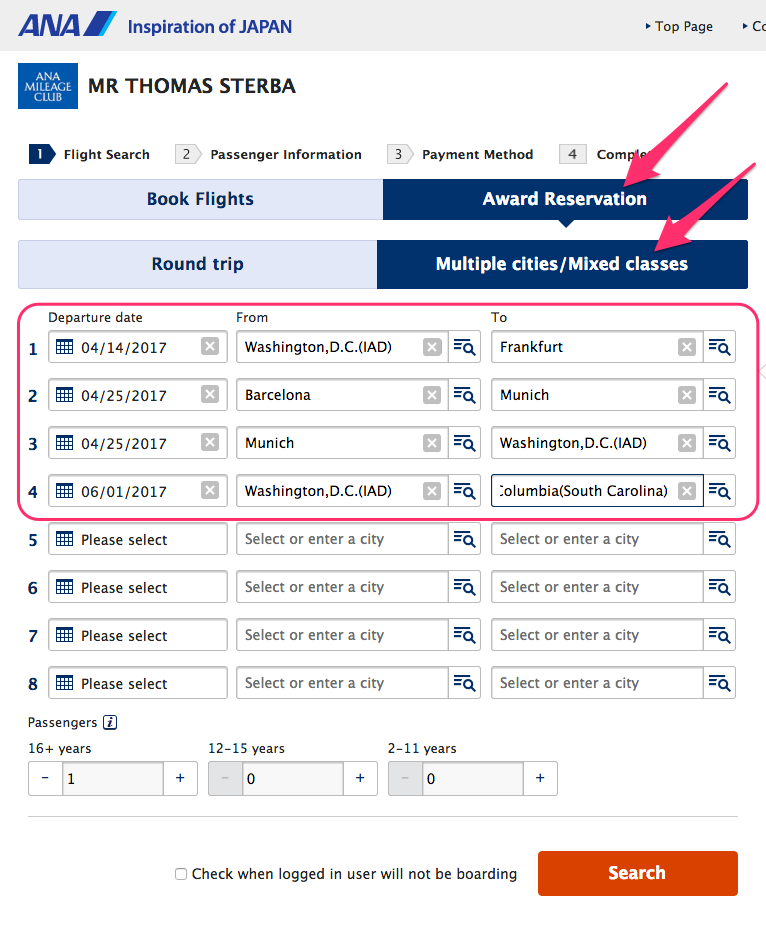 The available flights for the first leg of the trip show up and there is the same exact nonstop United flight that left at 5:15pm.  Let’s select it and hit ‘Next’. 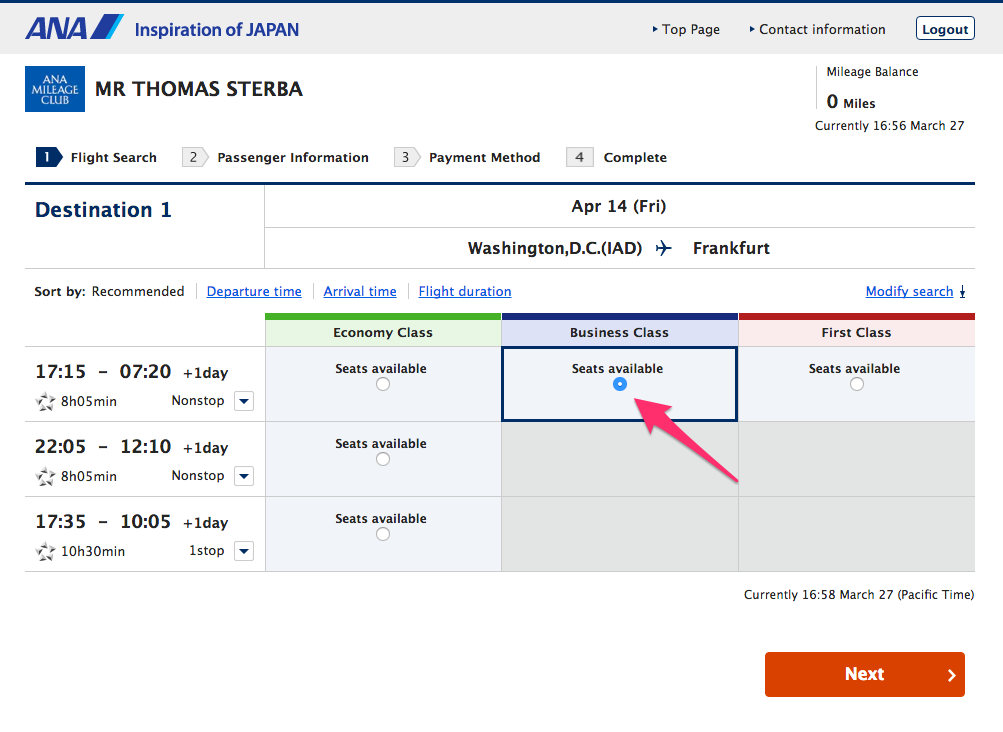 The results for the second leg of trip show up next.  Note there are multiple options and specifically three nonstop options.  Make sure you select the 9:10am flight which matched our search on United.com. 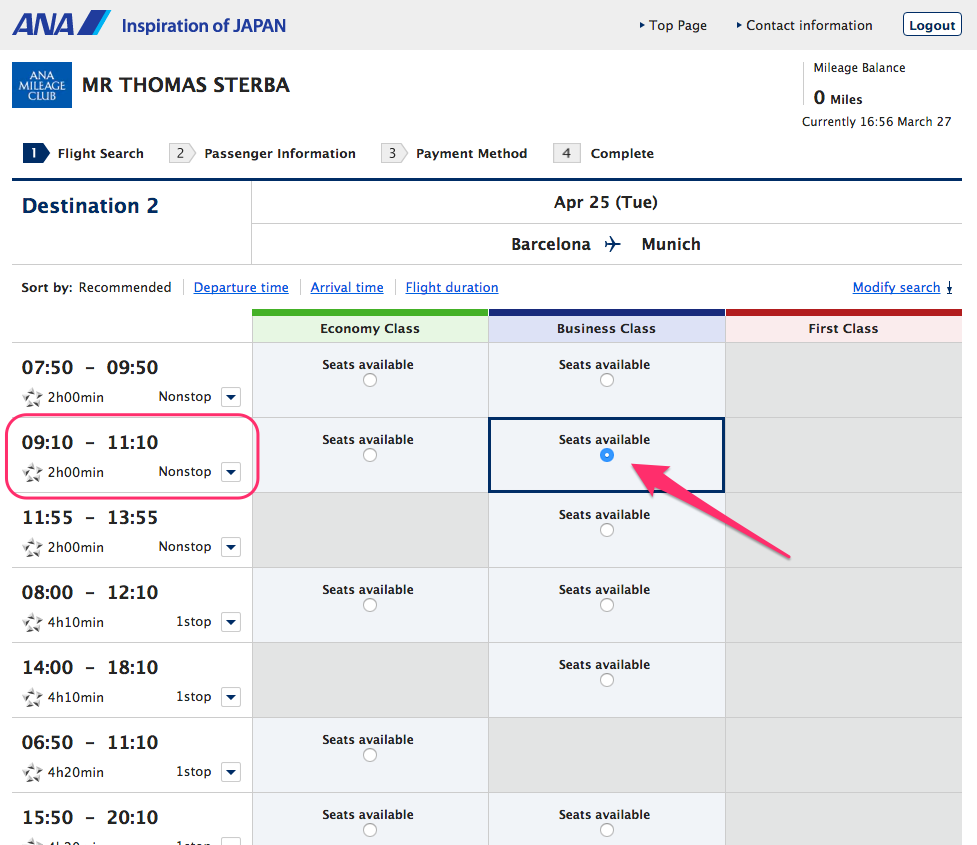 Next we have the results of the third leg of our trip.  Remember when I mentioned above that United’s website is more user friendly for award searches?  Here’s why – if we had selected the 11:55am non stop flight in the step above, we would have arrived in Munich at 1:55pm and we would have missed the only flight from Munich to Washington DC that had Business Class award space which leaves at 12:20pm. 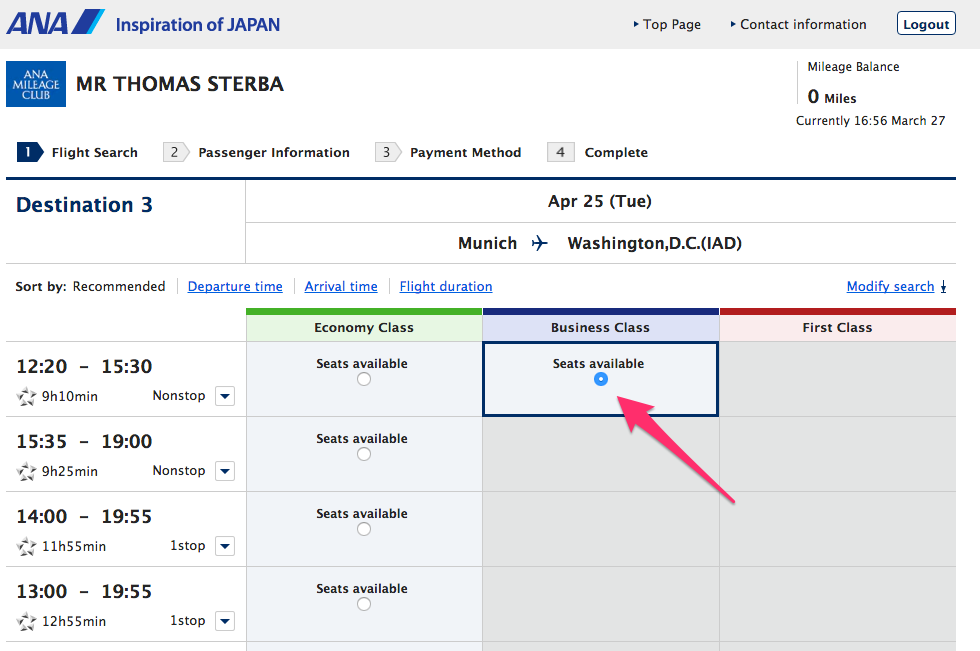 And finally, let’s select the fourth and final leg of our trip which includes our stopover in Washington DC for more than a month before ending in Columbia, SC. 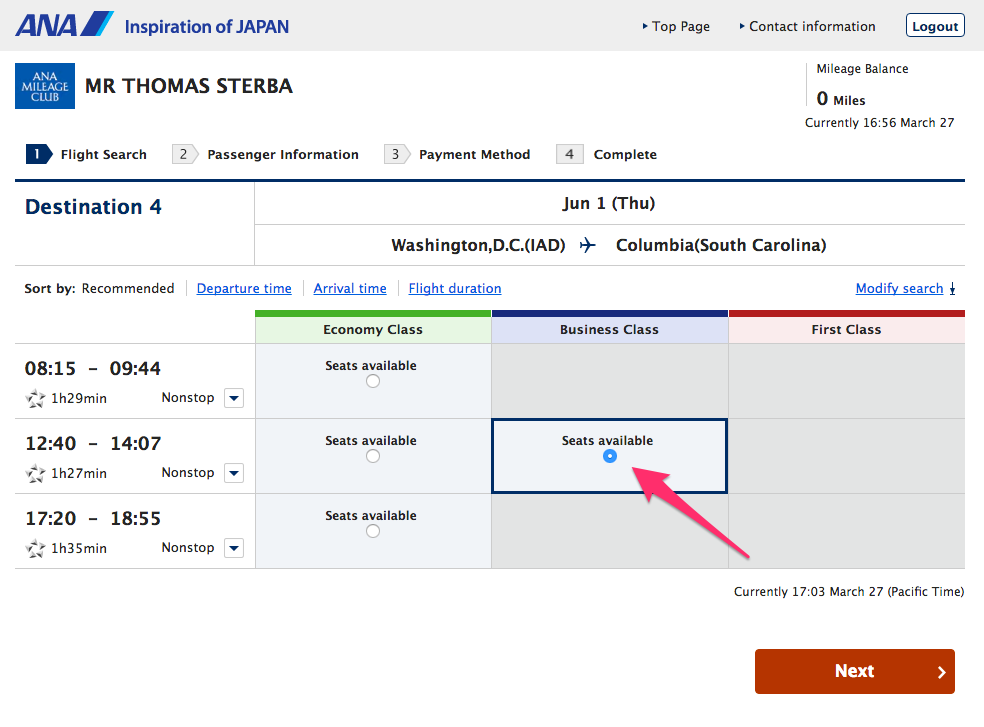 After hitting ‘Next’ one final time, we are brought to the summary page: 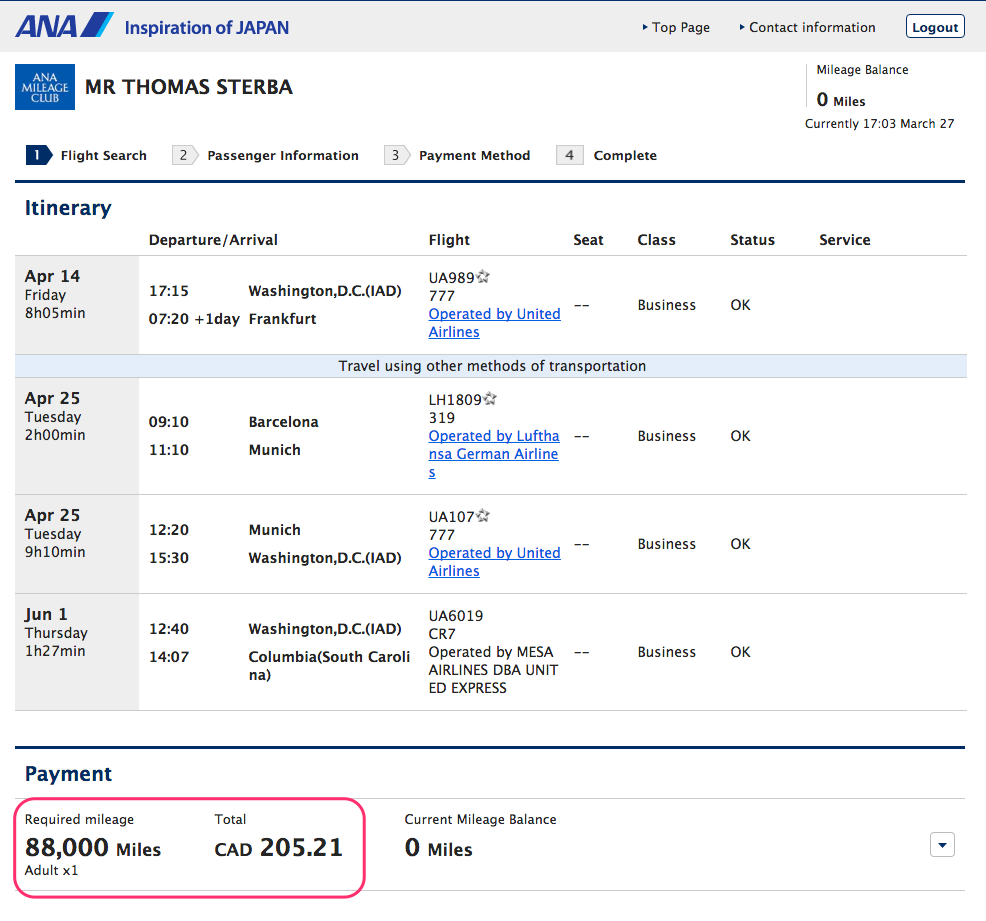 American Express's Platinum card is a high end card that offers a plethora of benefits, credits, and perks.  Currently there is a 100,000 point + 10X points at gas stations & grocery stores offer after spending $5000 in the first 6 months which can be transferred to hotel & airline partners or used for travel directly with American Express.

First, this card provides you with an automatic $15 per month ($35 in December) Uber cash in your account to use for either Uber rides or Uber Eats for a total of $200 per year.

Next, you also get a $200/year airline incidental credit to use on your selected airline which covers bag fees, inflight refreshments, seat assignments, etc.

The third credit this card also gives you is $100/year ($50 in Jan-Jun and $50 Jul-Dec) at Saks Fifth Avenue.  I've always been able to find something I needed at saks.com to make use of the credit twice a year.

The fourth credit is $100 towards Global Entry or TSA Precheck application fee (every 4 years).

In addition to the 5 credits above, this card earns 5X points on flights booked directly with airlines or through Amex Travel and 5X points prepaid hotels booked through Amextravel.com.

Finally having this card also gets you lounge access including American Express's own Centurion lounges, Delta Sky Club, and Priority Pass Select lounges.