If you are a follower of this blog, you already probably know that I was able to take advantage of a mistake rate last summer as noted by Gary at View from the Wing.  The deal was a club lounge room at the Hyatt Regency Paris Étoile for $21 + 3000 Hyatt points per night (Typical rates at this hotel vary from $150/night to over $600/night in June).

I remember the deal only lasting a few hours, but I was able to book the rate for April 17th-23rd, 2017.  About a week after making a booking, I received an email from Hyatt noting it was in fact an error but they would be honoring the rate for people who booked.  Hyatt also noted that you were not able to change dates, names, etc

Now the reviews on Tripadvisor are not glowing and I was actually a little concerned about staying at this hotel for a whole week.  Photos of the rooms on Tripadvisor make the place look like a dump.  But I knew the  hotel was undergoing a major renovation and the first set of newly renovated rooms were completed in January 2017.  I emailed the hotel asking for a newly renovated room.

The hotel sent plenty of email notices that there will be construction noise during the day and that there is a temporary entrance while the main lobby is being renovated.

The hotel is located within walking distance to the Arc de Triomphe and Champs de Elysees.  It is also located directly above a metro stop which gives you easy access to the whole city.  It is also above/attached to a shopping mall that has a few restaurants, a Starbucks, shops, drugstore, and small mini-market.

Be sure to check out my blog post on the cheap weekly metro pass.

It’s the third tallest structure within the city of Paris.  It’s the tall building on the right side in the photo below (photo from the top of the Arc de Triomphe). 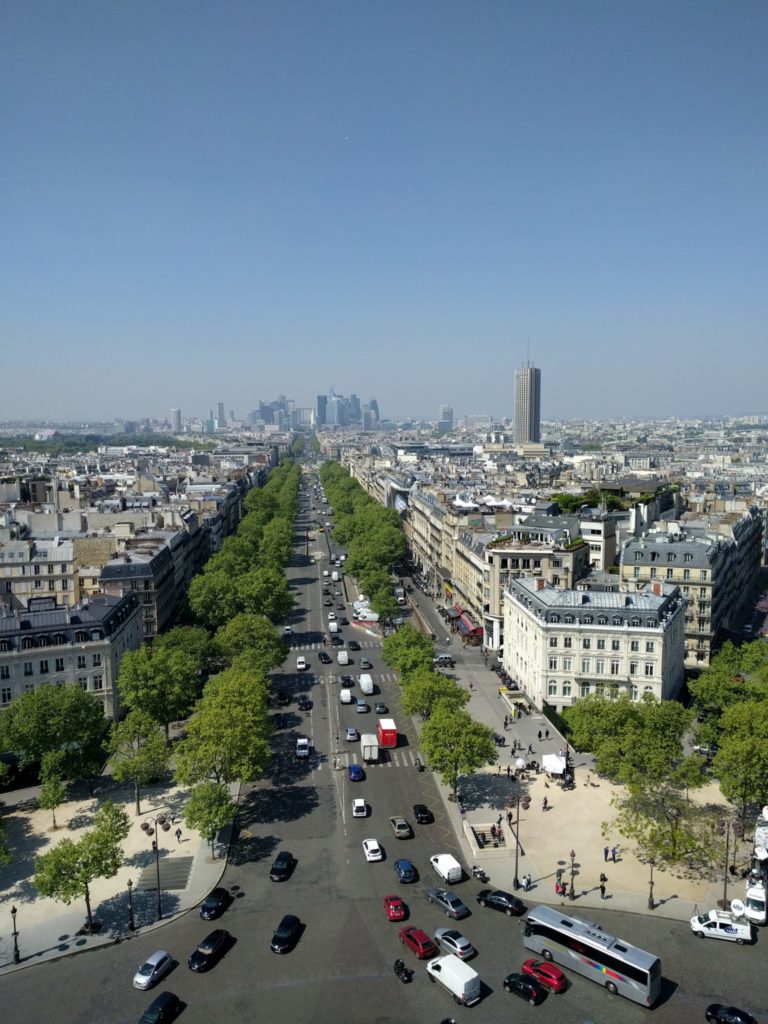 As I mentioned above the main lobby entrance is closed and under construction.  Hyatt created a temporary entrance on the side of the building at one of the mall entrances.  It is easily identifiable with the purple awning below.  There was also a doorman and security stationed at the entrance at all times.  Once inside there was a short walk to a dedicated set of elevators that would take you to the 4th floor where the temporary lobby reception area was setup. 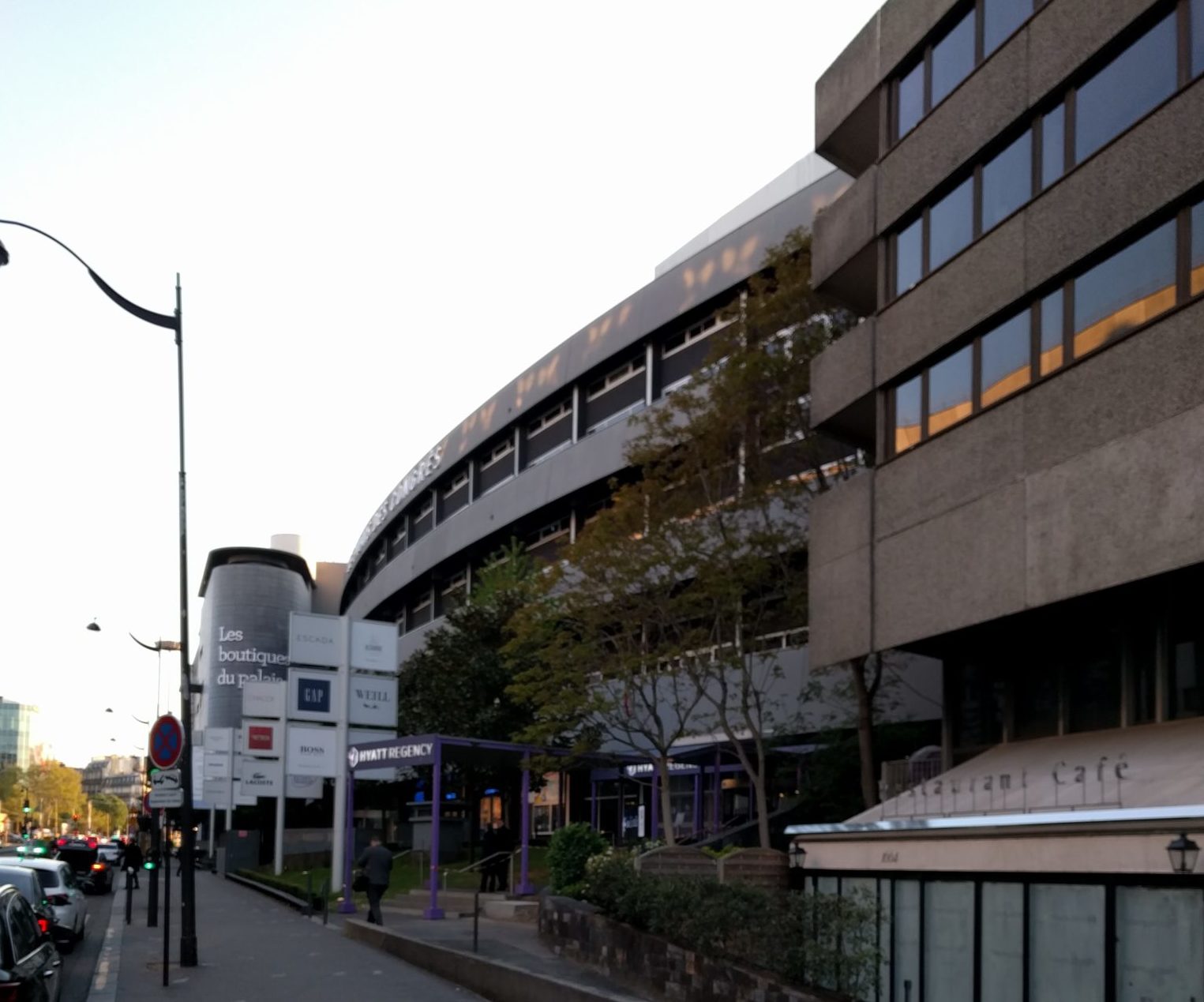 In the temporary hallways to the rooms, Hyatt has some renderings of the soon to be completed lobby, check-in area, and rooftop bar.  The renderings of completed construction look amazing.  I would love to see it when completed. 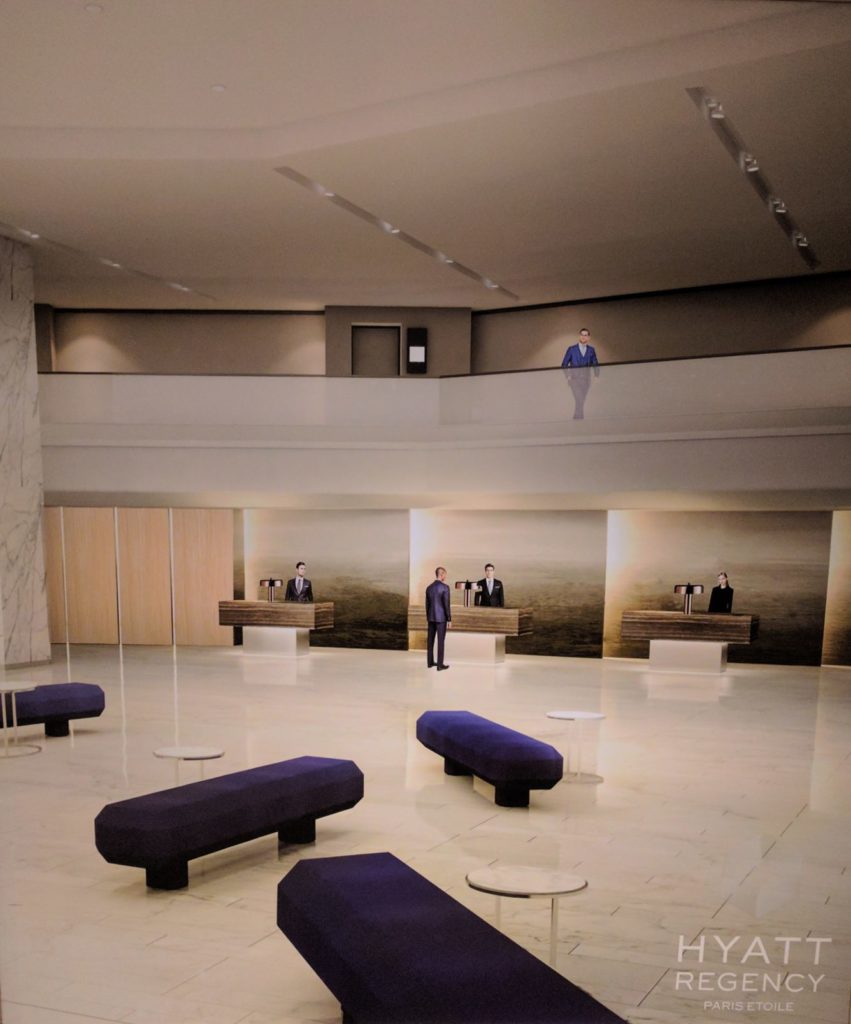 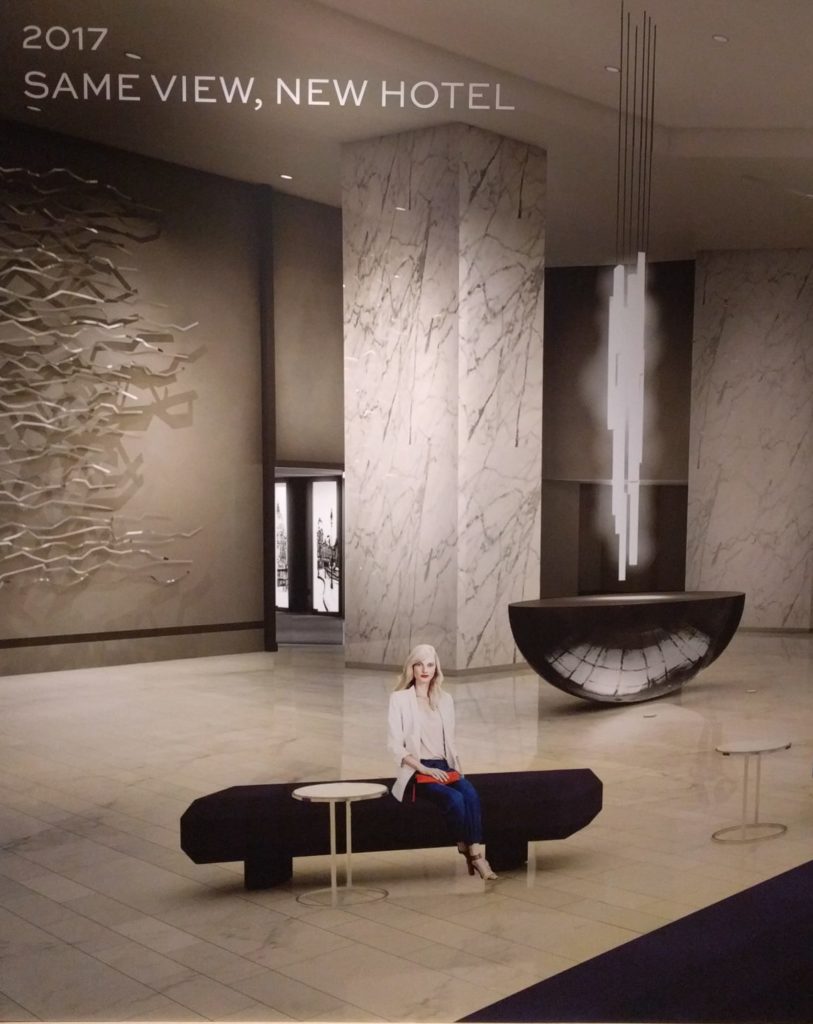 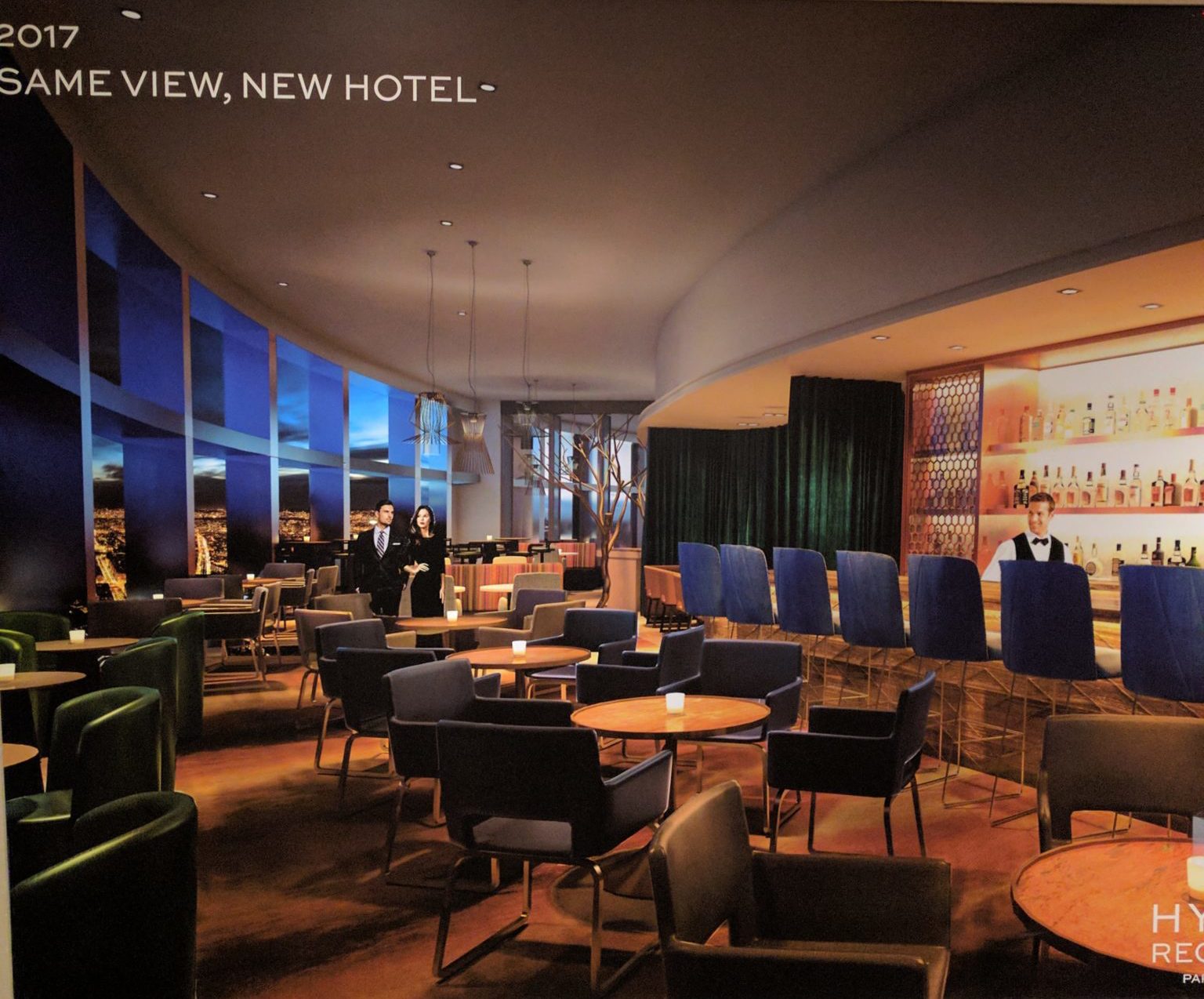 We arrived very early to the hotel – before 10:00am.  I had emailed the hotel before we arrived noting that we would be arriving early and requesting a newly renovated room.  I got a response saying they will make note of it but can’t guarantee room type or that we will be able to check-in that early.

When we arrived, we were warmly greeted and helped immediately – there was no other guests in the temporary reception area.  Our check-in host said our room wasn’t quite ready yet but she would check with her manager if there was another room we could be switched to.  She told us, they had booked us into an Eiffel Tower view room.   I asked if it was one of the newly renovated rooms and she confirmed it was and that they were only booking guests into the newly renovated rooms.

We waited a few minutes while she tried to arrange us change to a similar newly renovated room with an Eiffel Tower view that was already ready.  We took a seat on the couches and had some lemon water setup.  In just a few minutes, she confirmed we were all set in room 2111.

Our check-in agent also provided us with a letter good for two complimentary cocktails at the restaurant bar area as a welcome gift.  Since we were booked into a club lounge room and the club lounge was also under construction, we were told we would be having breakfast complimentary each morning in the restaurant.  The breakfast was very very good – lots of different options and food stations.  I overheard someone who had to pay for it, it was 25€ per person.  And we had pad 21€ for the room which included breakfast for both of us!

One other item noted that since the lounge was closed, they had setup a temporary small lounge area in the restaurant for us each night.  From 5pm-11pm, there was complimentary wine, cheese, meats, pear tarts, chips/guacamole, etc.  We took advantage of this most nights and thought it was very good also.

Finally our check-in agent presented us with a chocolate easter egg as a gift since we arrived the day after Easter.  It was a nice surprise that we ate throughout the week. 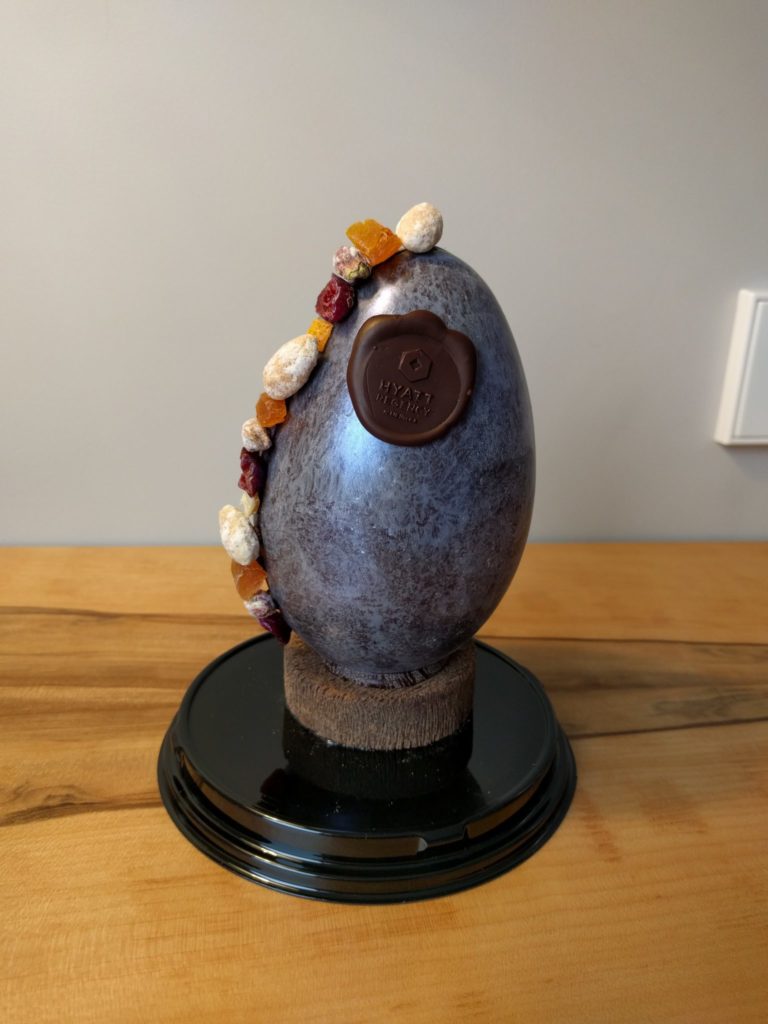 We were booked into room 2111.  After a quick elevator ride, we were at our newly renovated floor. 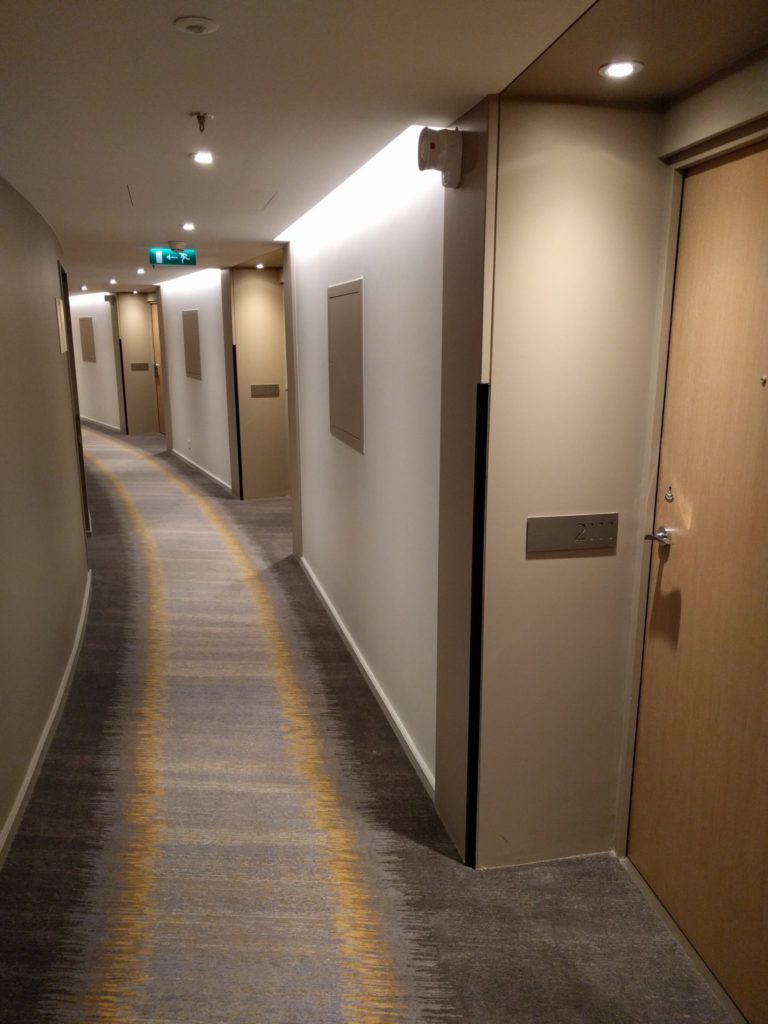 The rooms are tiny – about the size of New York hotel rooms.  But I thought they did a very nice job with the renovations.  The view of the Eiffel Tower is as advertised. 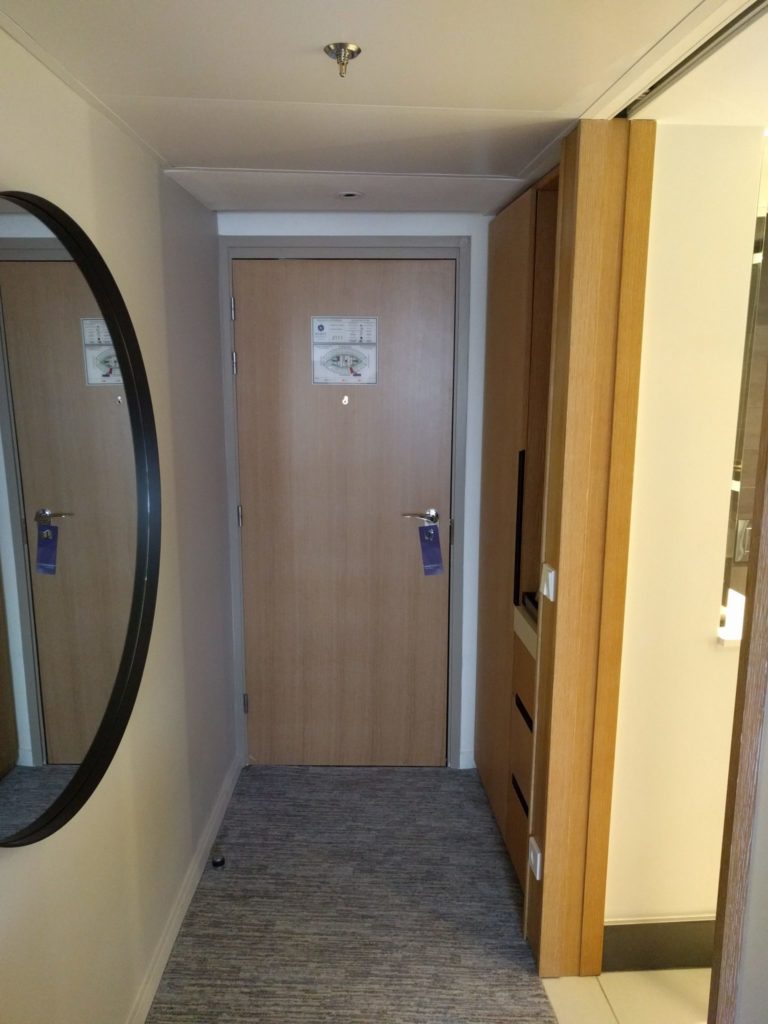 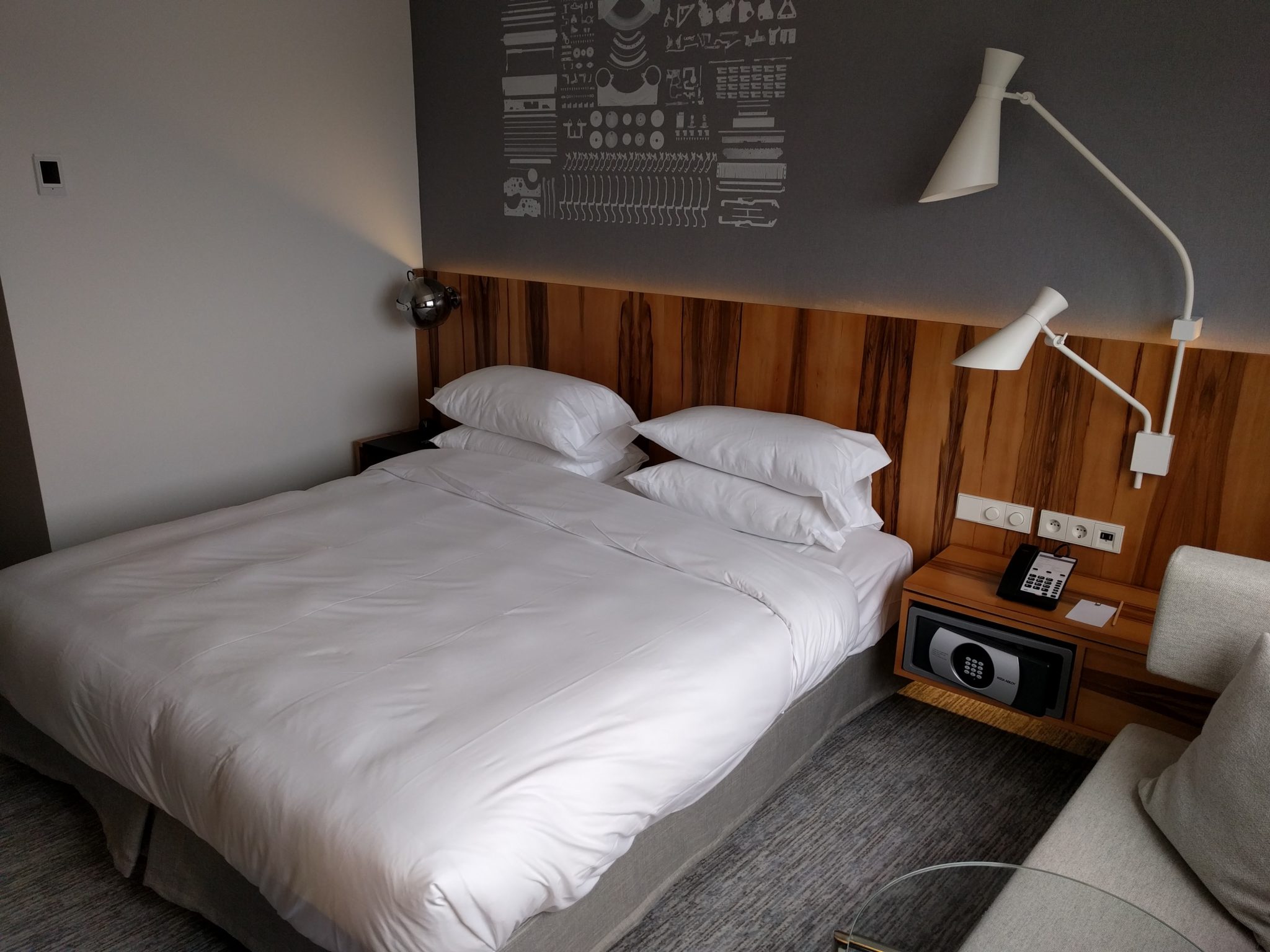 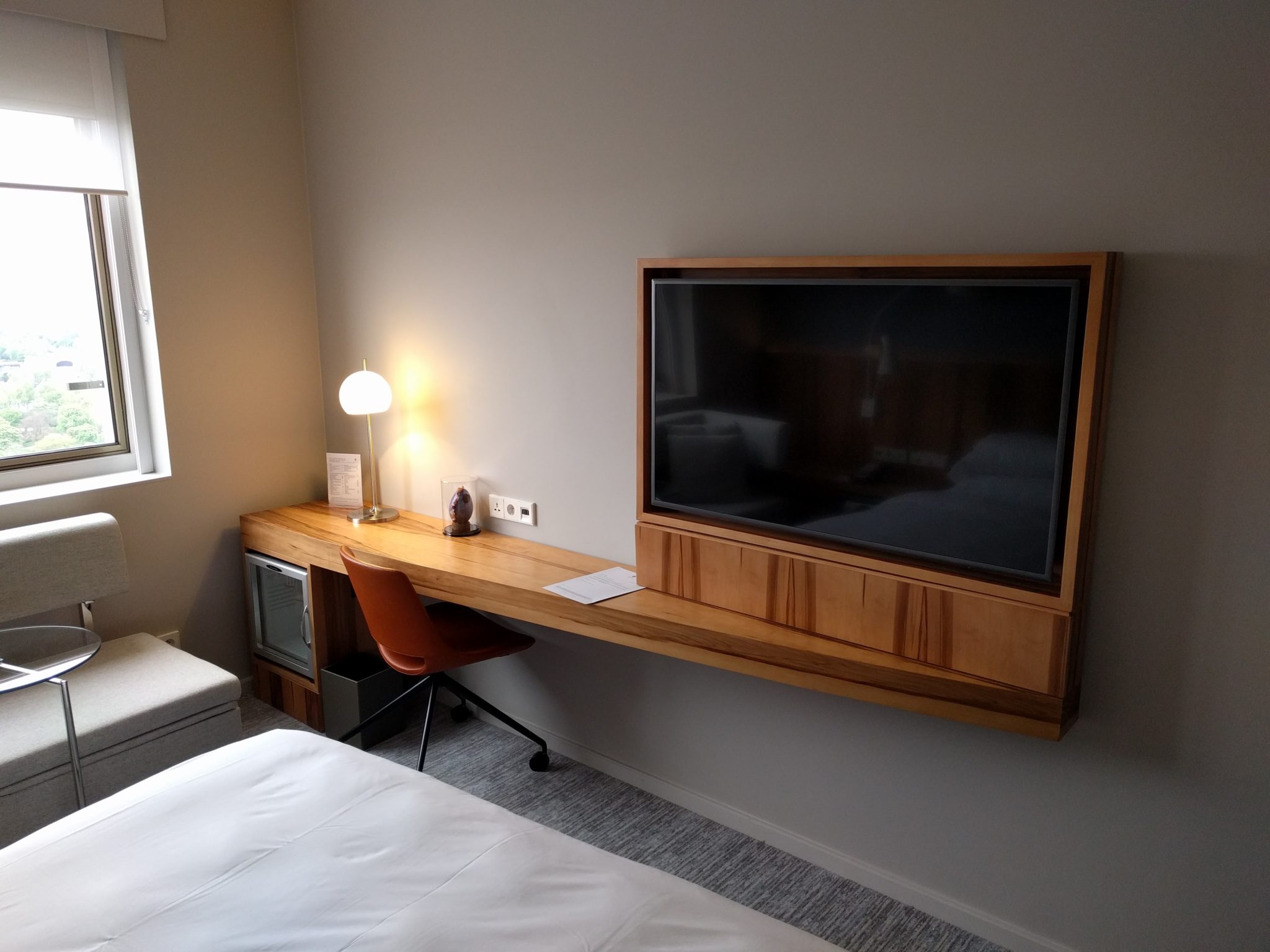 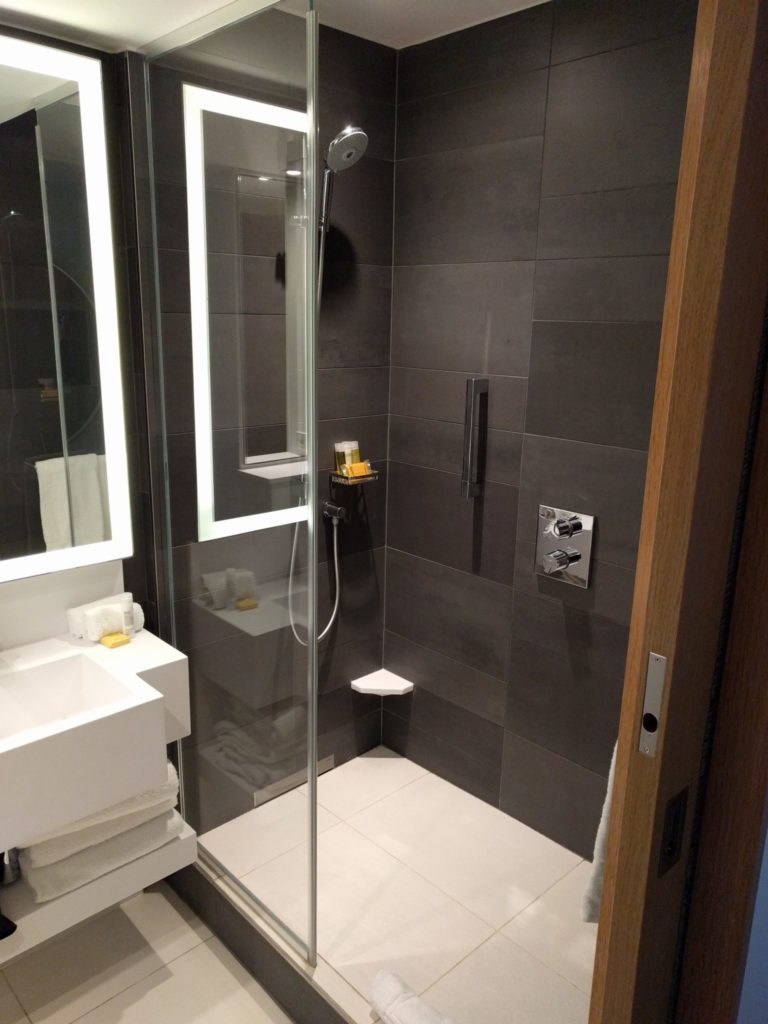 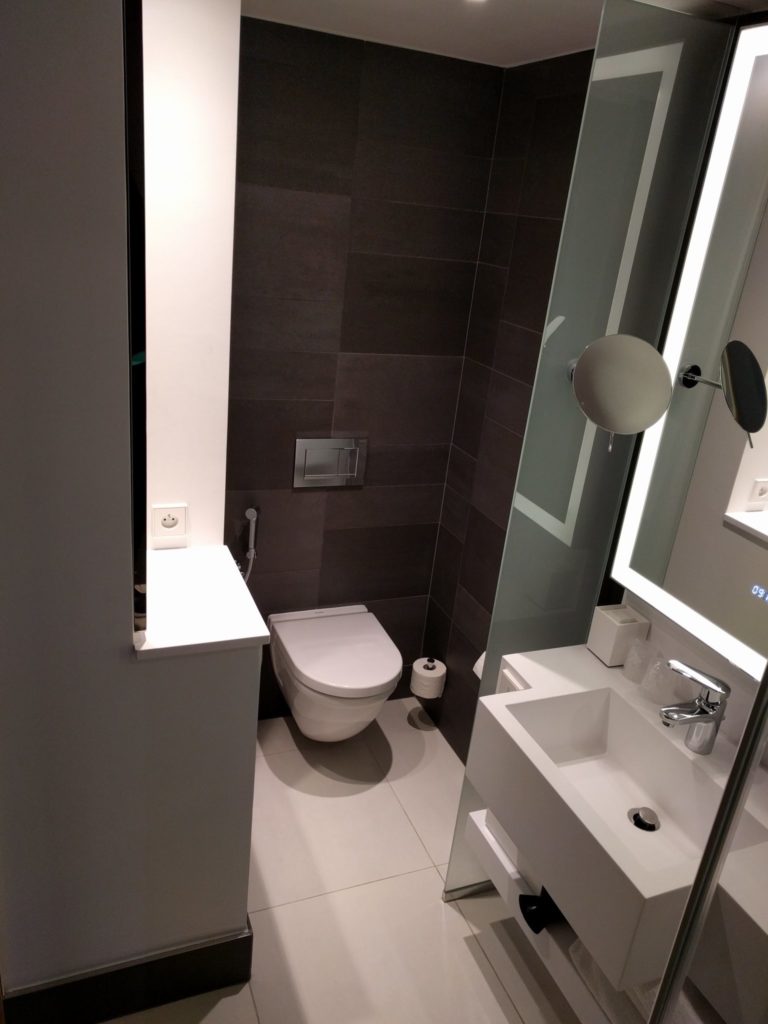 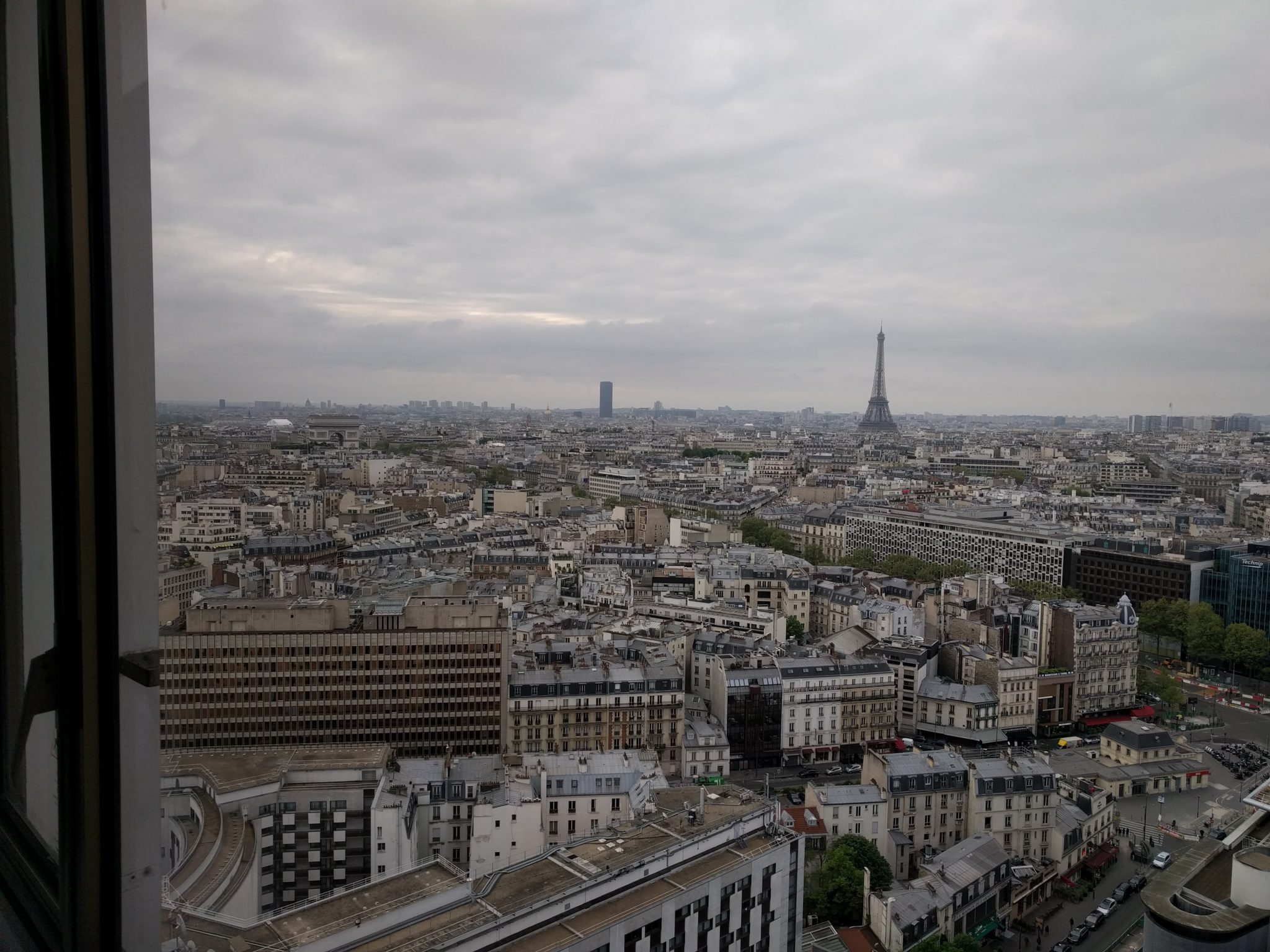 Overall, we enjoyed our stay at the Hyatt Regency Paris Étoile.  It’s a solid hotel that will be a great place to stay when the renovations are complete later this year. While the rooms are small, the renovations completed so far make the rooms seem bigger than they actually are.  It has a great location with plenty of shopping, mini-markets, and restaurants near by.  I wouldn’t hesitate to stay here again. 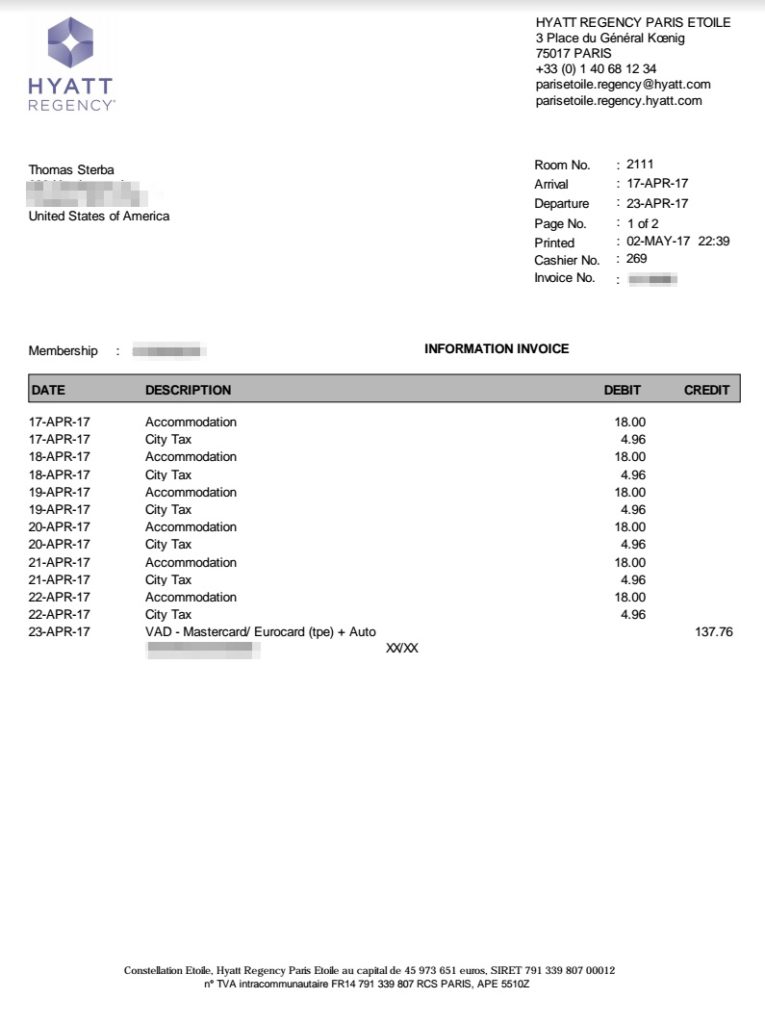 Have you stayed here before?  What did you think? 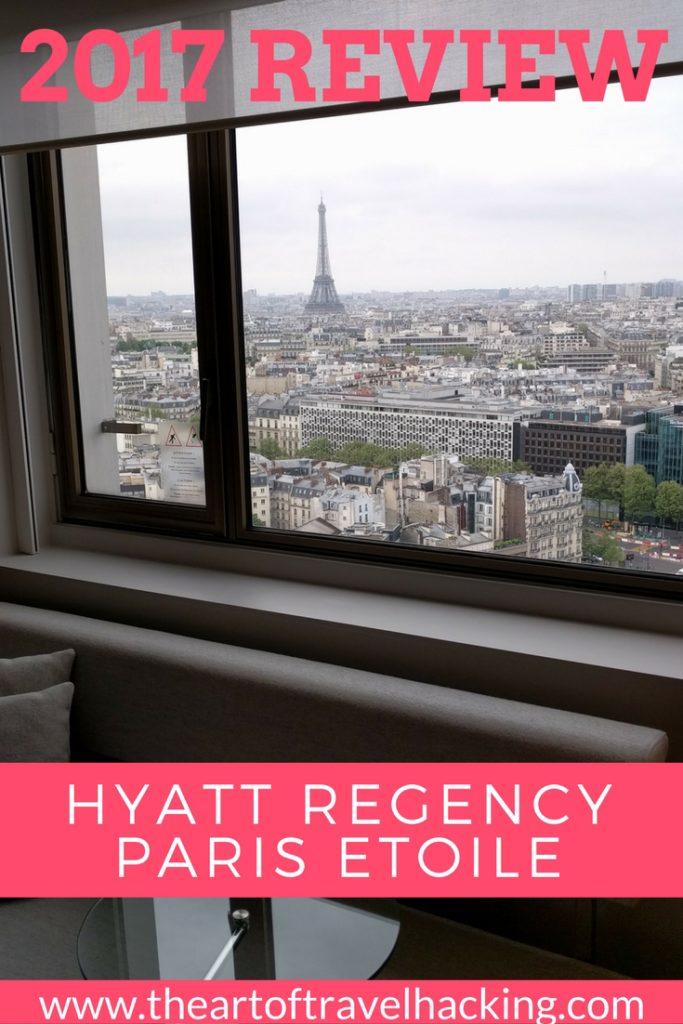