After years (literally) of waiting, I finally had a chance to visit Nassau’s newest resort – Baha Mar.  Let me just say WOW – it’s amazing!  It reminds me of the Wynn in Las Vegas – the rooms, elevator lobbies, rooms, even the casino floor.  I liked it much better than The Cove at Atlantis.  There were a few kinks that need working out (with training during the soft opening) but overall everything was excellent.

The 3.5 billion dollar mega resort was originally scheduled to open in December 2014.  It got to 97% complete at the time and the grand opening was pushed to March 2015 so the last 3% could be finished.  But it never opened in 2015 with Baha Mar filling for bankruptcy.  A new buyer was finally found in December 2016 and the construction to complete the project began shortly after.  Here is an article with the full timeline if interested.

Baha Mar is located on cable beach, only about a 10-15 minute taxi ride ($30 to Baha Mar & $36 to Airport) from the airport.  You can see Atlantis Paradise Island and the cruise port from Baha Mar.

A similar three night summer stay in the most basic room is currently running $1152.  By using Hyatt points, all of the taxes, VATs, and resort fees were included except for a ~$20/night service charge.  Therefore, I got a 2.1¢/pt value for this redemption  ($1090/50,000 pts) which isn’t terribly bad. 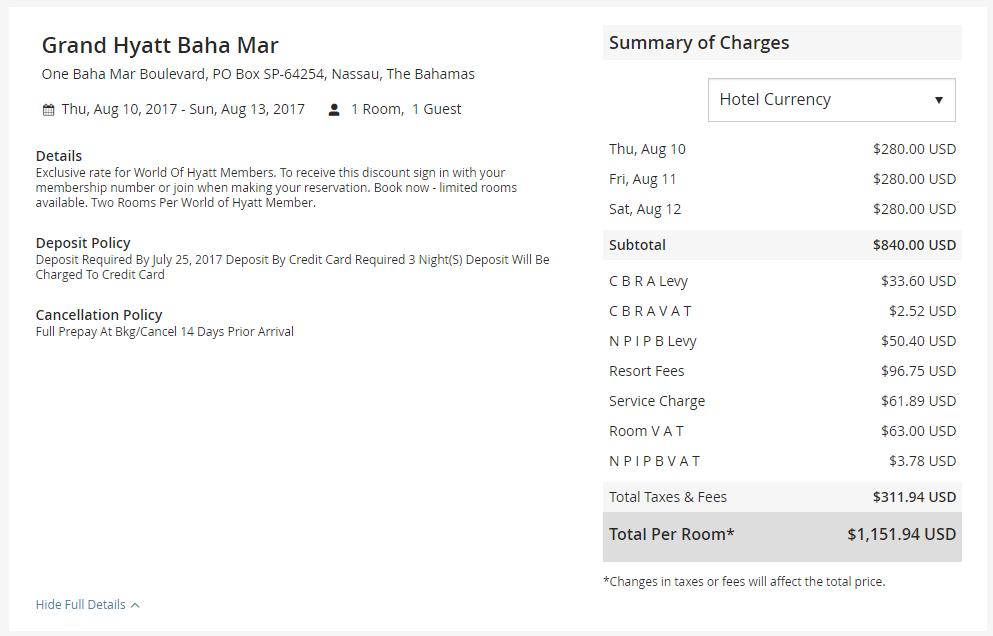 After getting dropped off by taxi at the impressive main entrance, bellmen were on had to help with our luggage and directed us to the east tower where the check-in desk was located. 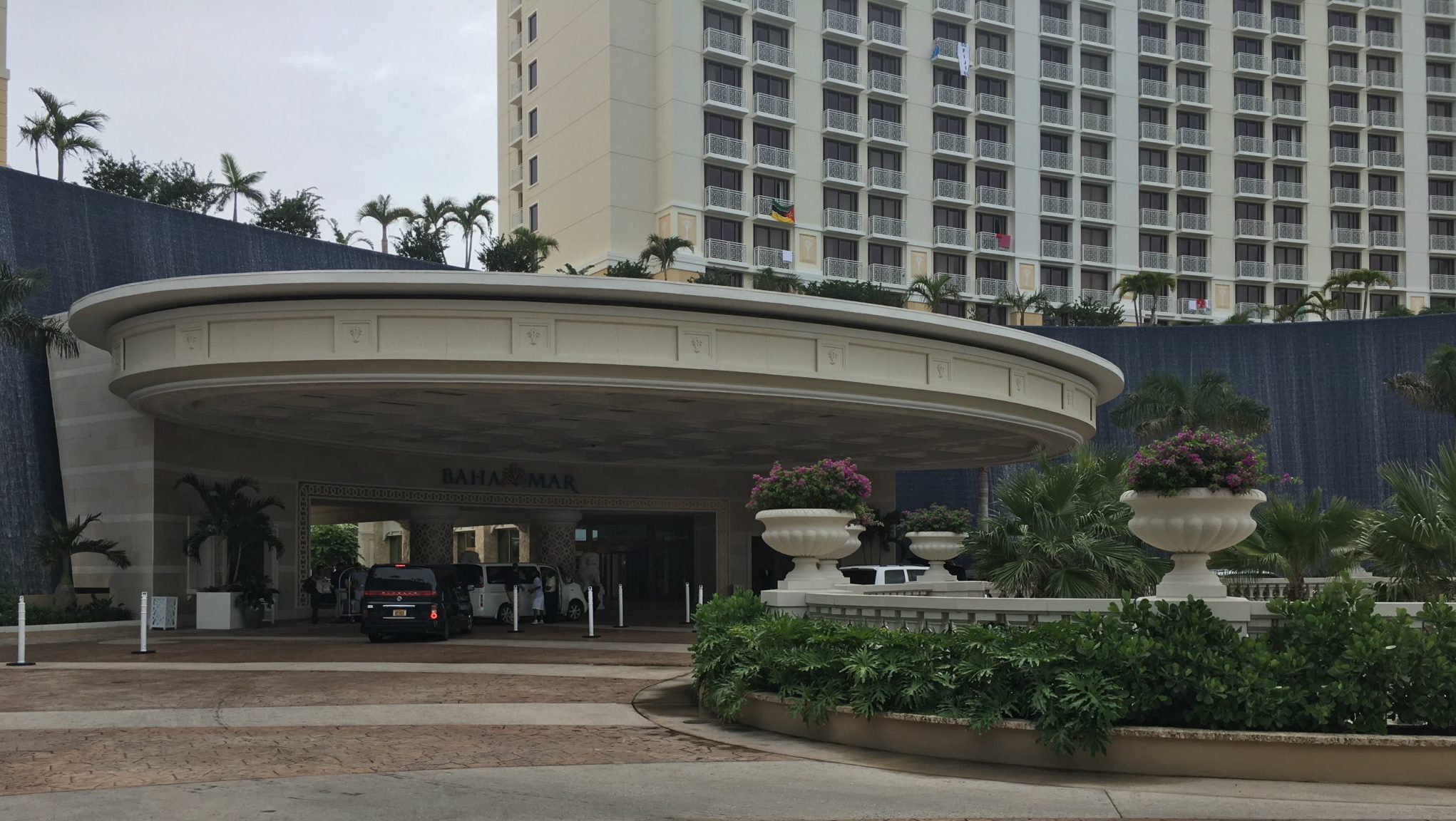 There is a large fish tank at the center of the check-in desk that is home to 75 lion fish. 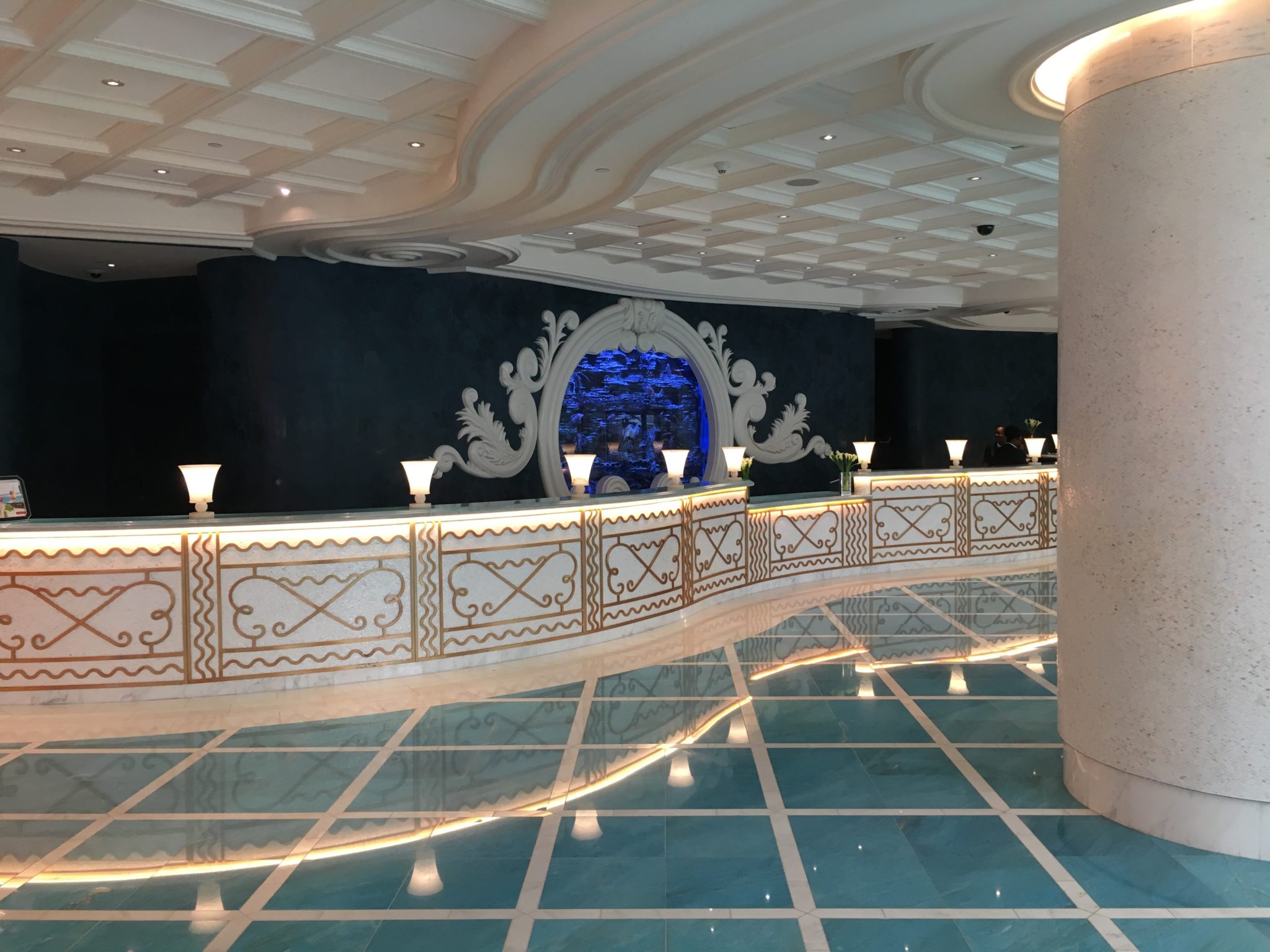 There is a separate check-in space for World of Hyatt members at the far right hand side of the very long desk.  Unfortunately we did not see this until it was our turn to check-in. 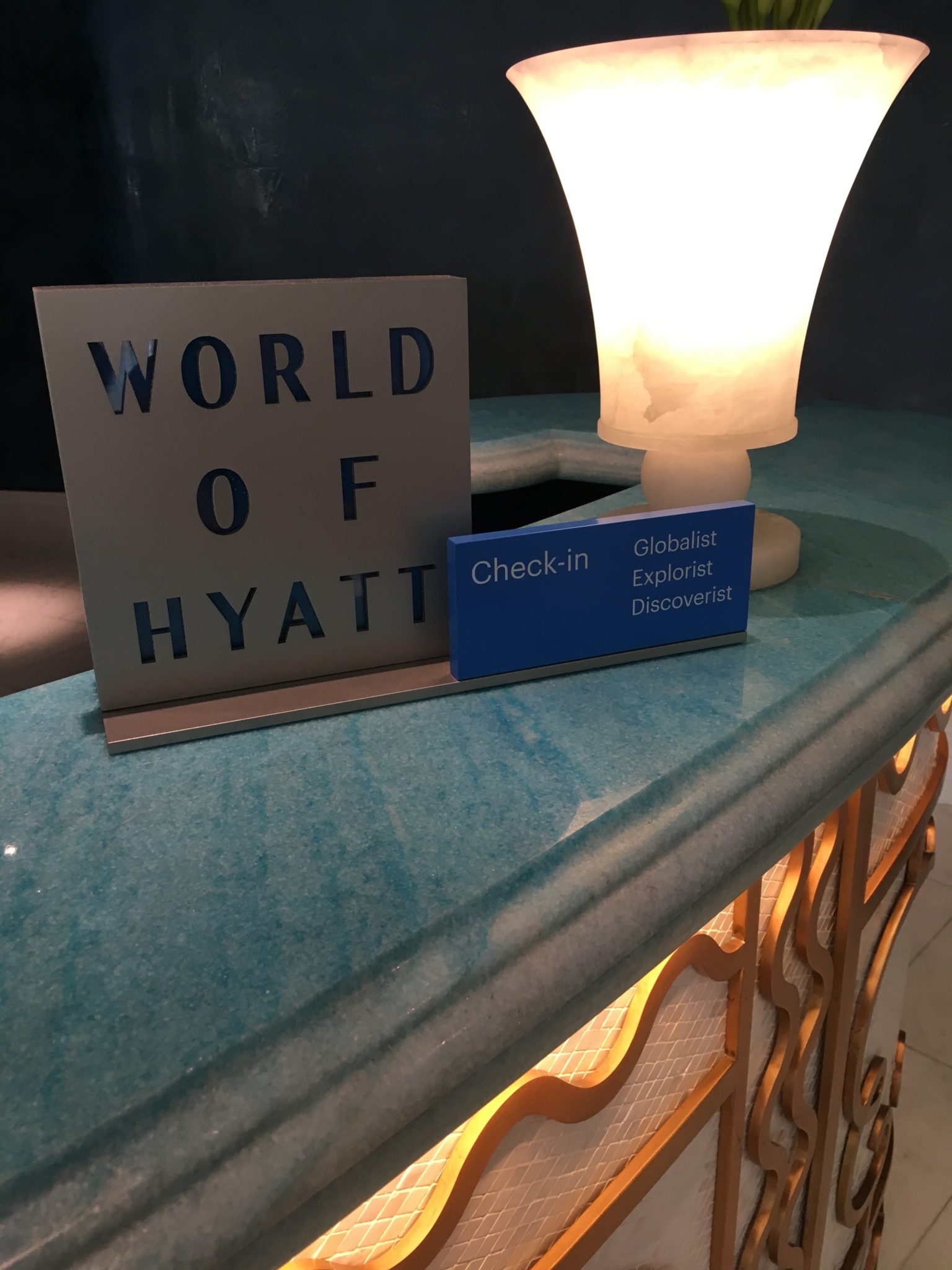 My only issue with entire stay revolves around the check-in process and keys to the room.  Let me explain what happened.

We arrived at approximately 2:00 pm.  The agent said a fountain view room was ready but if we would like to wait they can put us in an ocean view.  The weather wasn’t that nice to head to the pools, so we decided to wait and would check out the resort until the room was ready.  She took down my mobile number and email address to text/email me when the room was ready.  I asked approximately how long it would take.  She couldn’t answer and said she was going to call housekeeping immediately to have our room cleaned and ready next.

The agent asked if I had any other questions – yes I did.  I had to ask for a map of the resort as one wasn’t initially offered.  Here is what they provided: 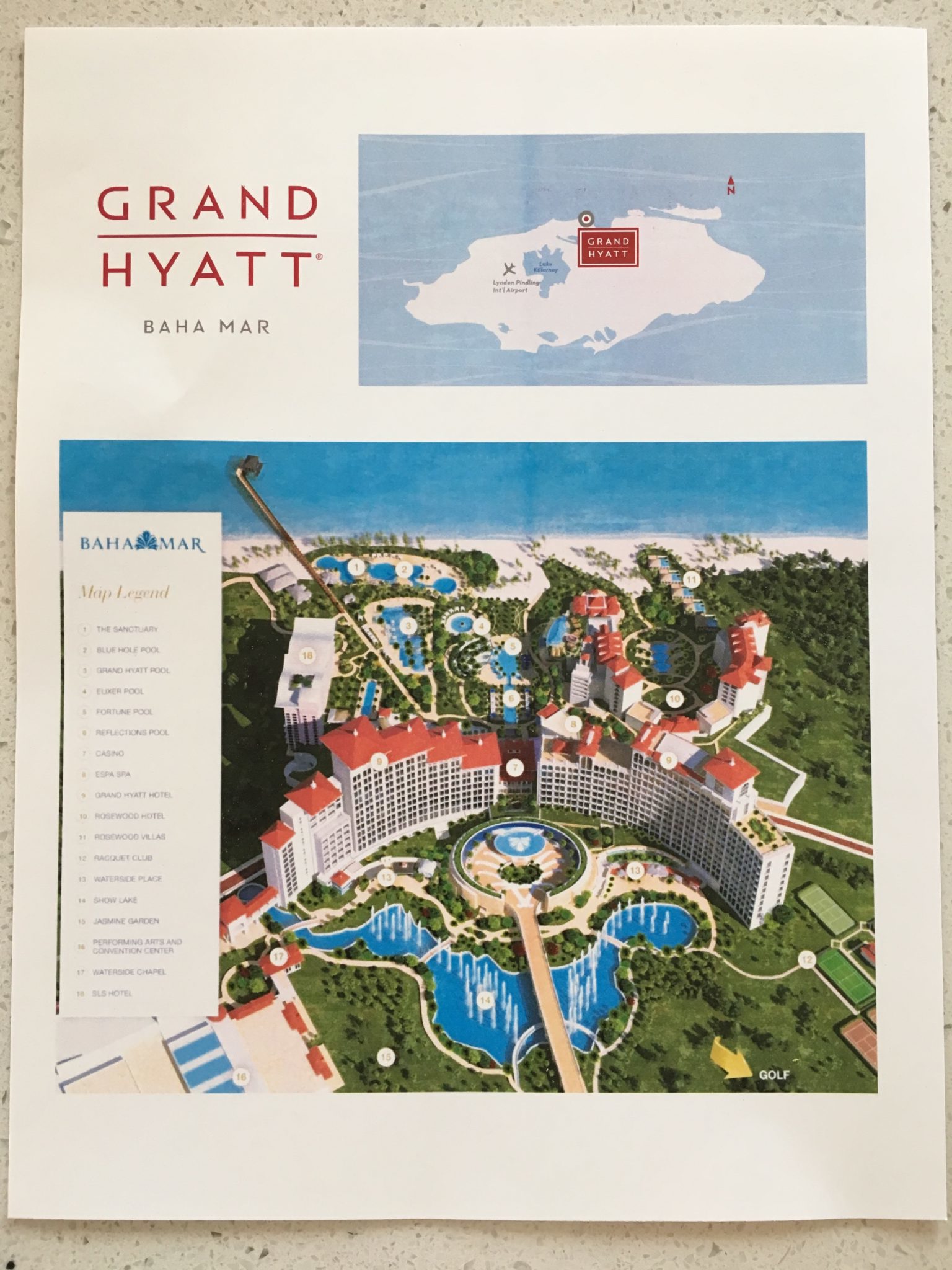 I then asked about the location of the Grand Hyatt Club lounge and the agent indicated it was not yet open yet.  I told her that I understood it was only currently open to Globalist members but I had emailed the general manager of the hotel and requested I be able to use one of my four club lounge passes for being an Explorist member and he had responded that they would be happy to honour the pass for my visit.   She typed away on the computer for a minute or so than told me how to get to the Club Lounge which is located on the ground floor of the west building.

So we took off to check out the resort.  After wandering around for two and a half hours we headed back to the main lobby as I still hadn’t received a text or email that our room was ready – but this time there was a long line of people to check-in and it wasn’t really moving.  After a few minutes, I thought why not wait in the club lounge for a little bit and I would head back to the main lobby so we headed over to the west tower’s club lounge.

One of the lounge attendants (I believe it was Michelle) was happy to check on our room after I explained we never received a text or email and there was a long line at reception.  The attendant came back with news that our room was ready and could get our keys for us if I gave her a photo ID which I did.  Twenty minutes later she arrived back keys in hand for our room!

Here’s where the second part of the new hotel kinks happened.  We headed up to the 20th floor and our electronic key cards would not open doors.  So I headed back down to reception, waited a few minutes more (one person in front of me) and explained the keys did not work.  The agent didn’t offer an apology or anything, she simply reprogrammed the keys again and said ‘here’.  I headed back up to the 20th floor again and the keys still don’t work and head back down again while my family sits on the floor of the hallway.  It’s a very large resort too – it’s a good 5-10 minute walk back and forth.

I go back to the same agent and tell her they still don’t work, she goes over to someone else and they ‘work’ on it for a few minutes and this time she escorts me up to the room to make sure they work.  On the way up she asks me how my day is going and frankly I said not too good, we had gotten up at 4:30am for a 7am flight, we waited ~3 hours for our room to be ready and just walked up and down twice with this key issue.  She apologized for these issues and asked that we have a complimentary lunch/dinner.  I thanked her for the offer. (The dinner charge was on the folio at checkout but was promptly removed after point it out)

We finally made it back up to the room and guess what – the keys still didn’t work.  But my family had gotten in the room as the bell service arrived while I was at the reception desk and his master key worked.  The check-in agent who escorted me to the room said she would be right back and left.  15-20 minutes later she arrived again with another set of key cards – these didn’t work either – yeap that’s four attempts so far.

At this point I hopped in the shower and my wife opened the door for a technician who came to the room and verified the lock was functioning properly and there was a programming issue because the 5th set of keys did not work.  I’m done with my shower and another technician came and did something (reset maybe?) and asked I try the keys again, I told him I didn’t have any keys as the check-in took each set that did not work.  Finally, a security person showed up 15-20 minutes later with a set of keys that worked.  We were able to leave the room and have dinner.

As I mentioned above this was the only hiccup on the trip – I understand the hotel is under a ‘soft opening’ and in the process of training employees.  Everywhere else and throughout the entire stay was flawless – from the club lounge attendants to the casino staff to the pool stay to the restaurants and housekeeping – friendly and FLAWLESS! 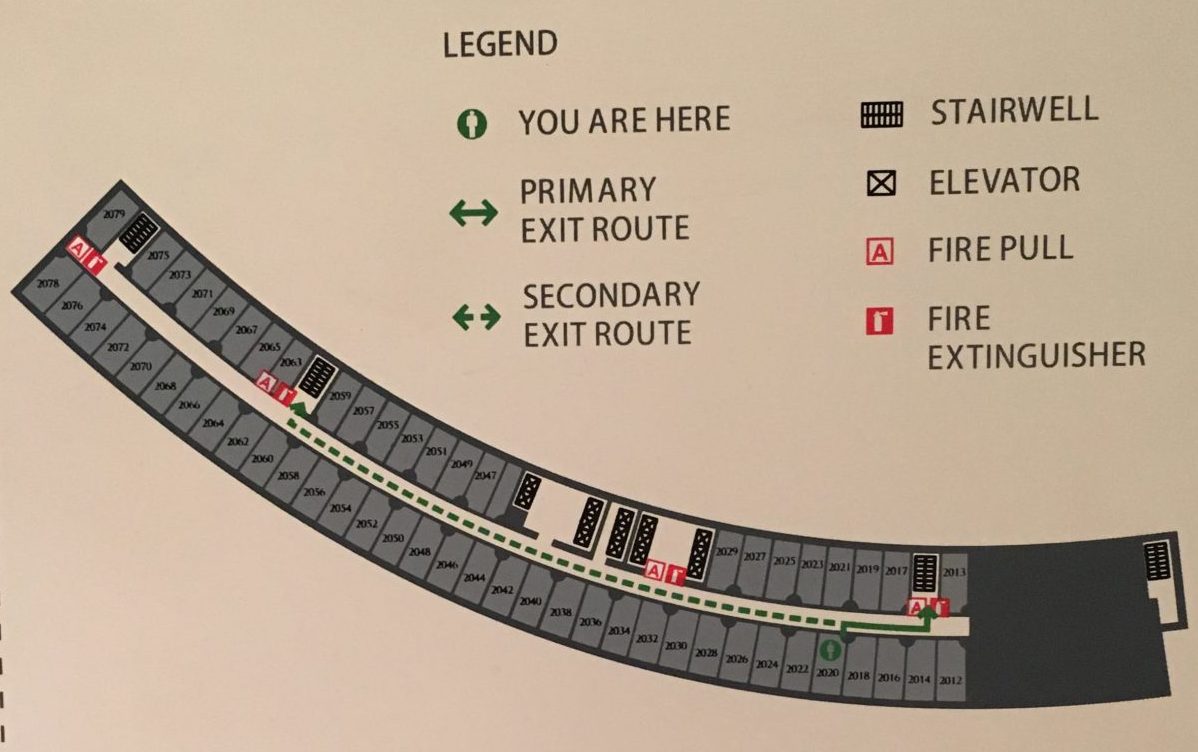 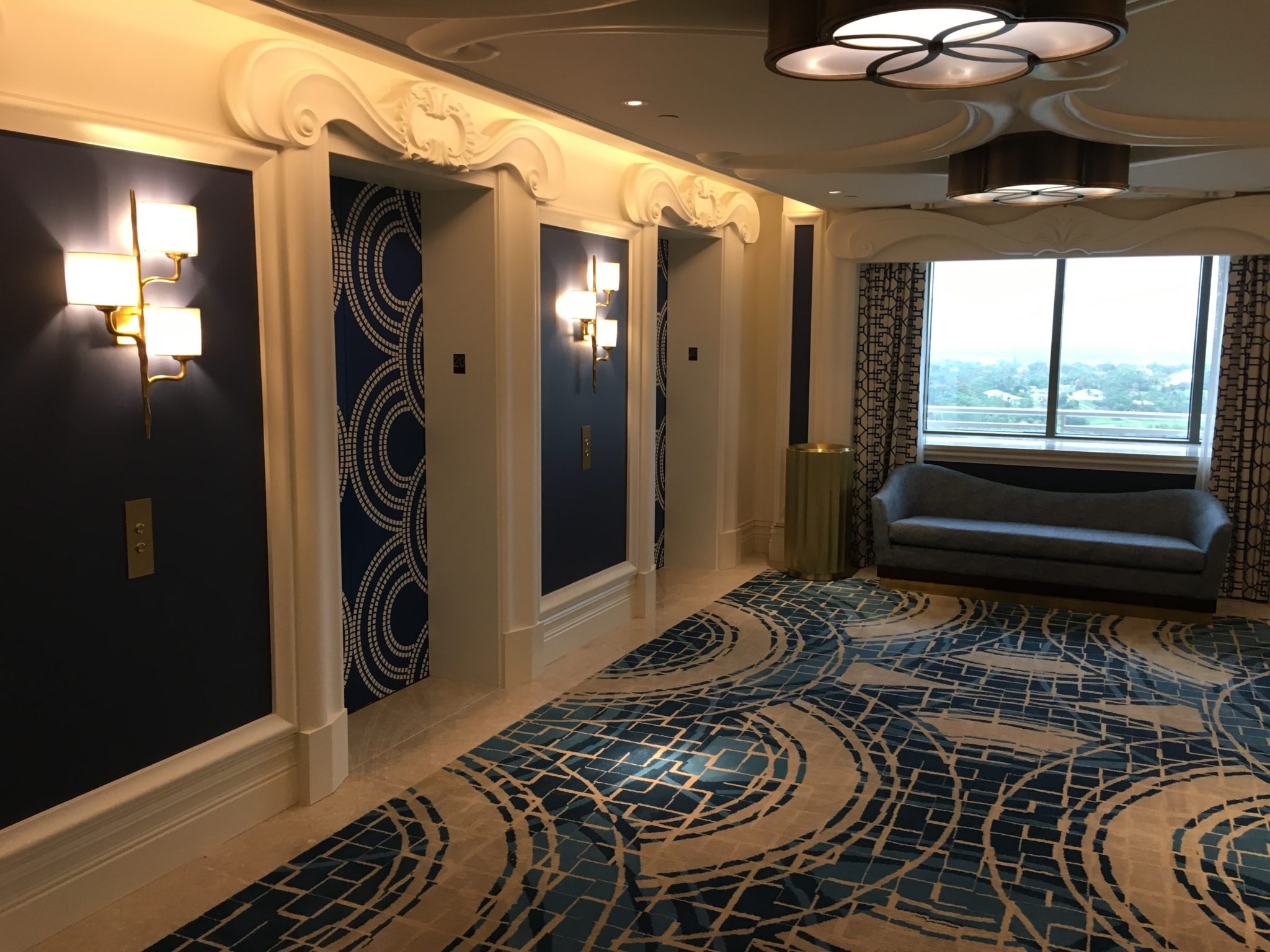 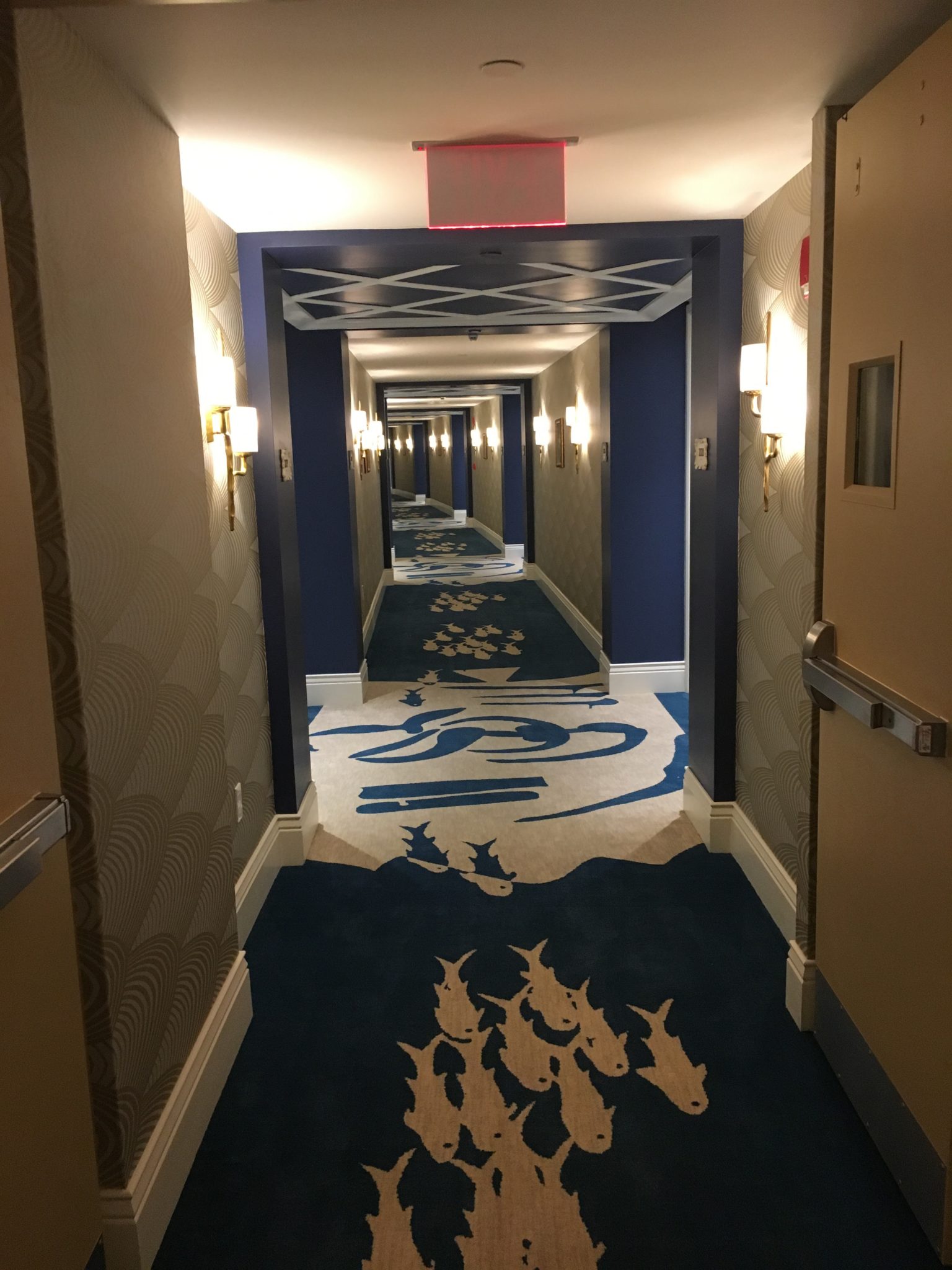 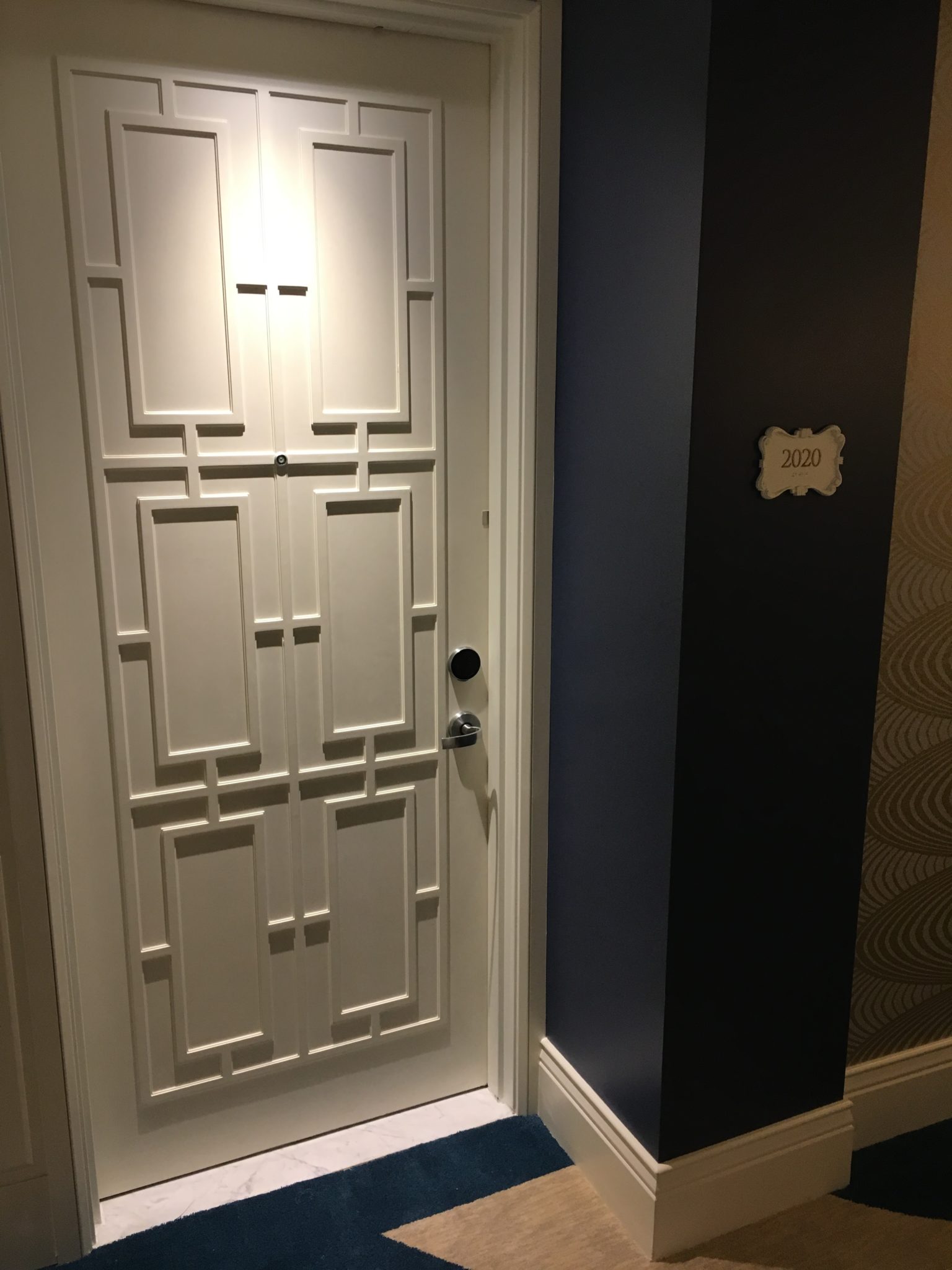 After entering the door, to the left was a large mirror and to the right, three small closets and the bathroom. 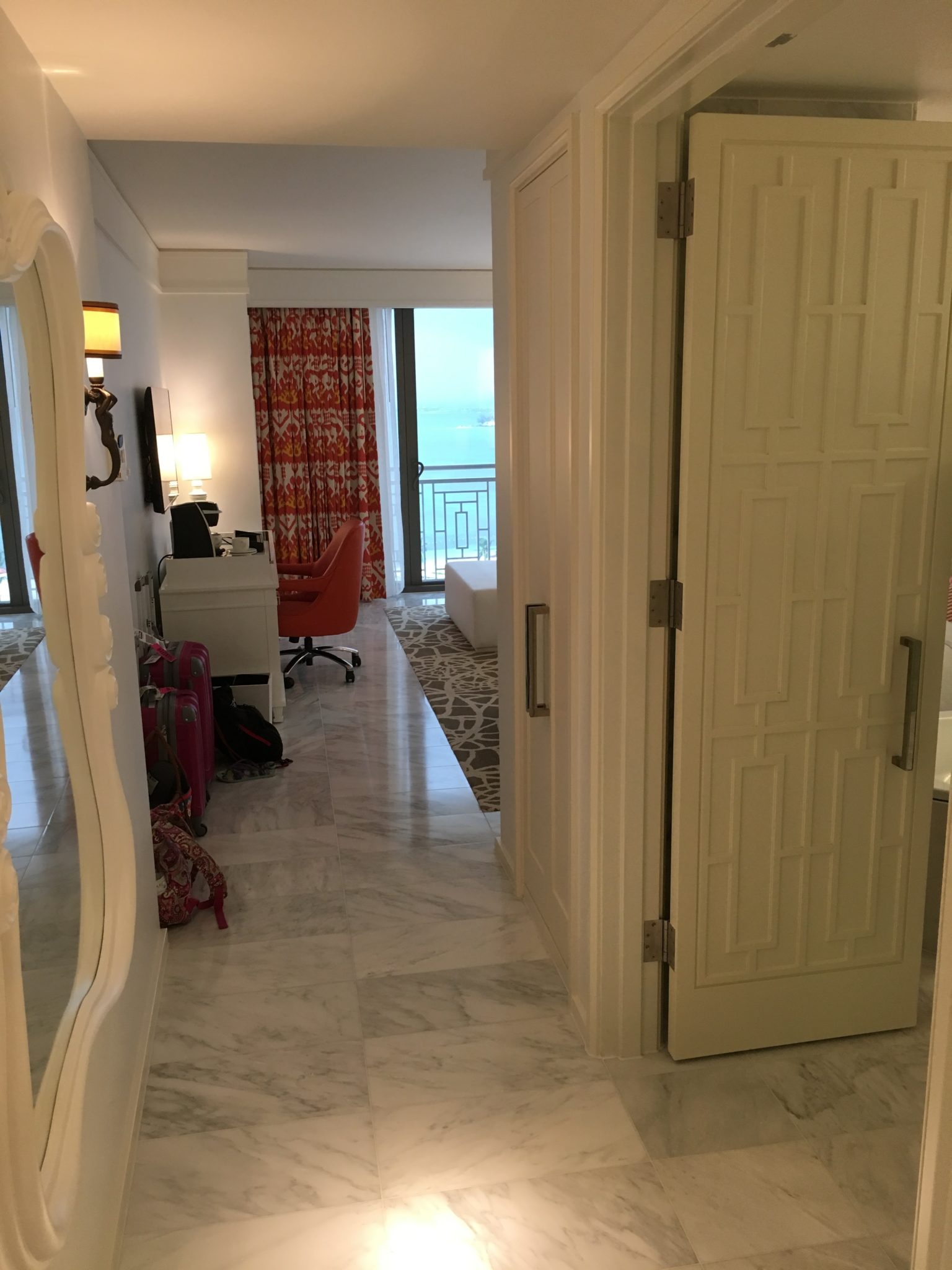 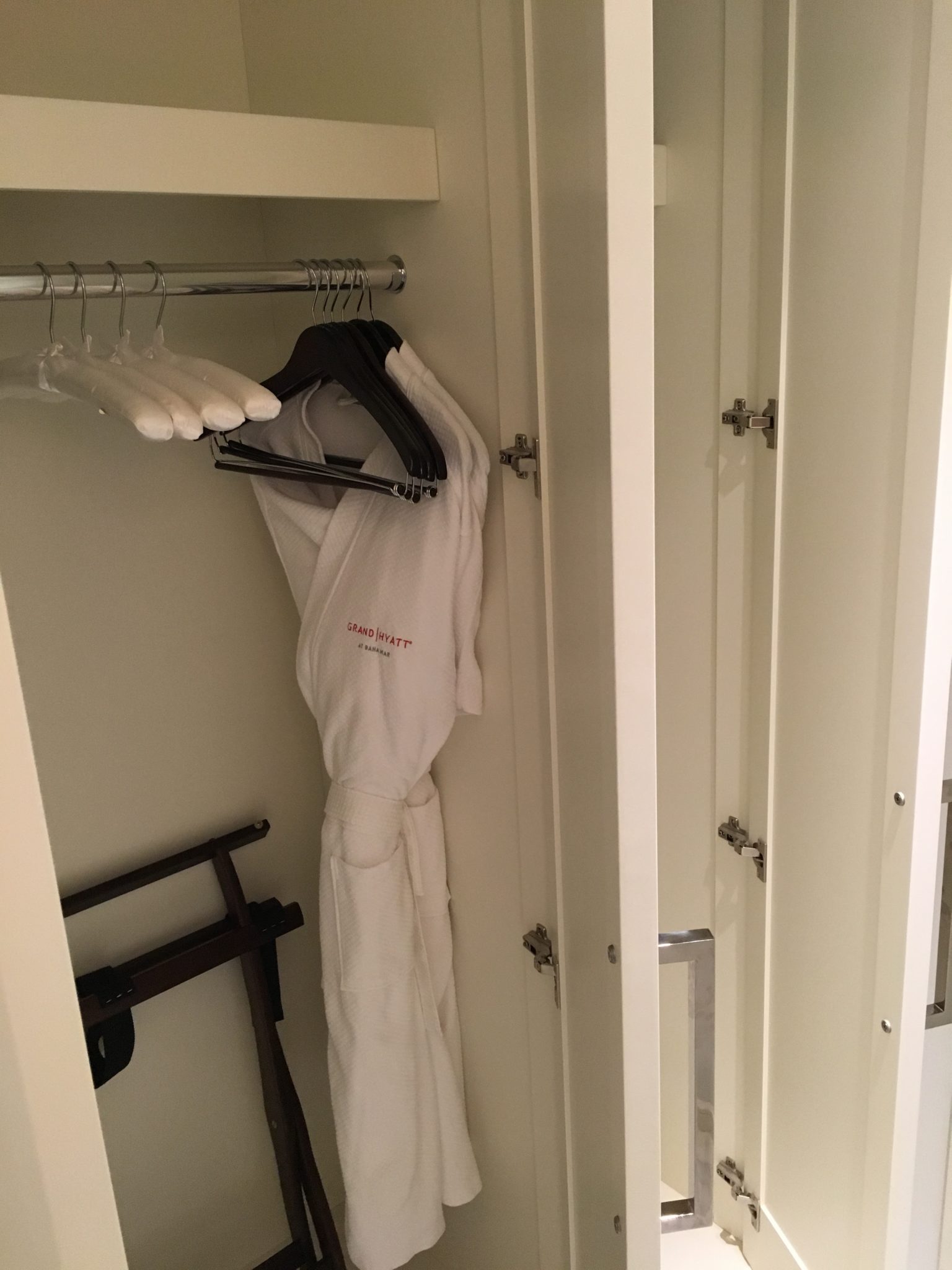 The kids came on this trip so we had two queen beds in lieu of a king. 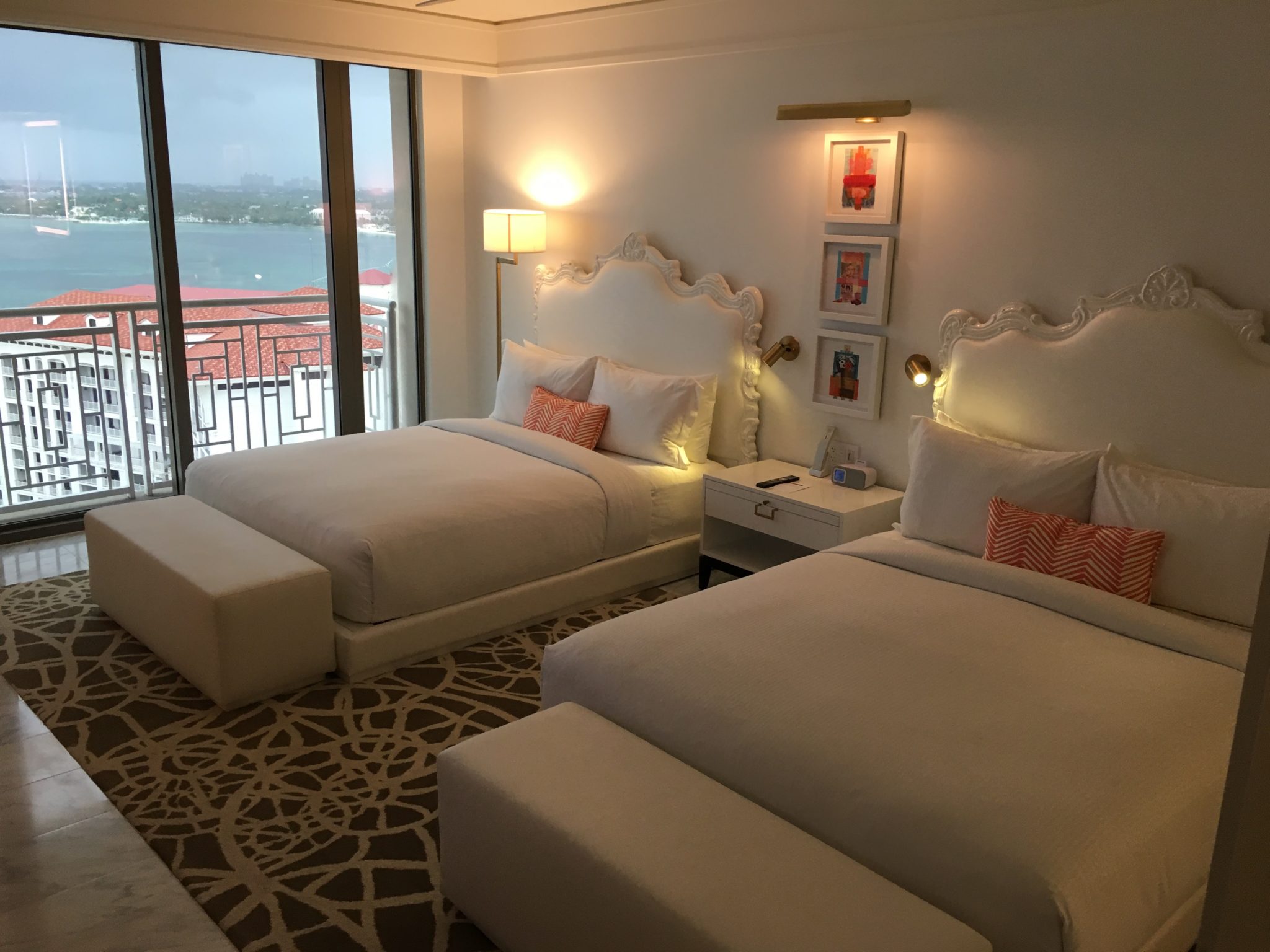 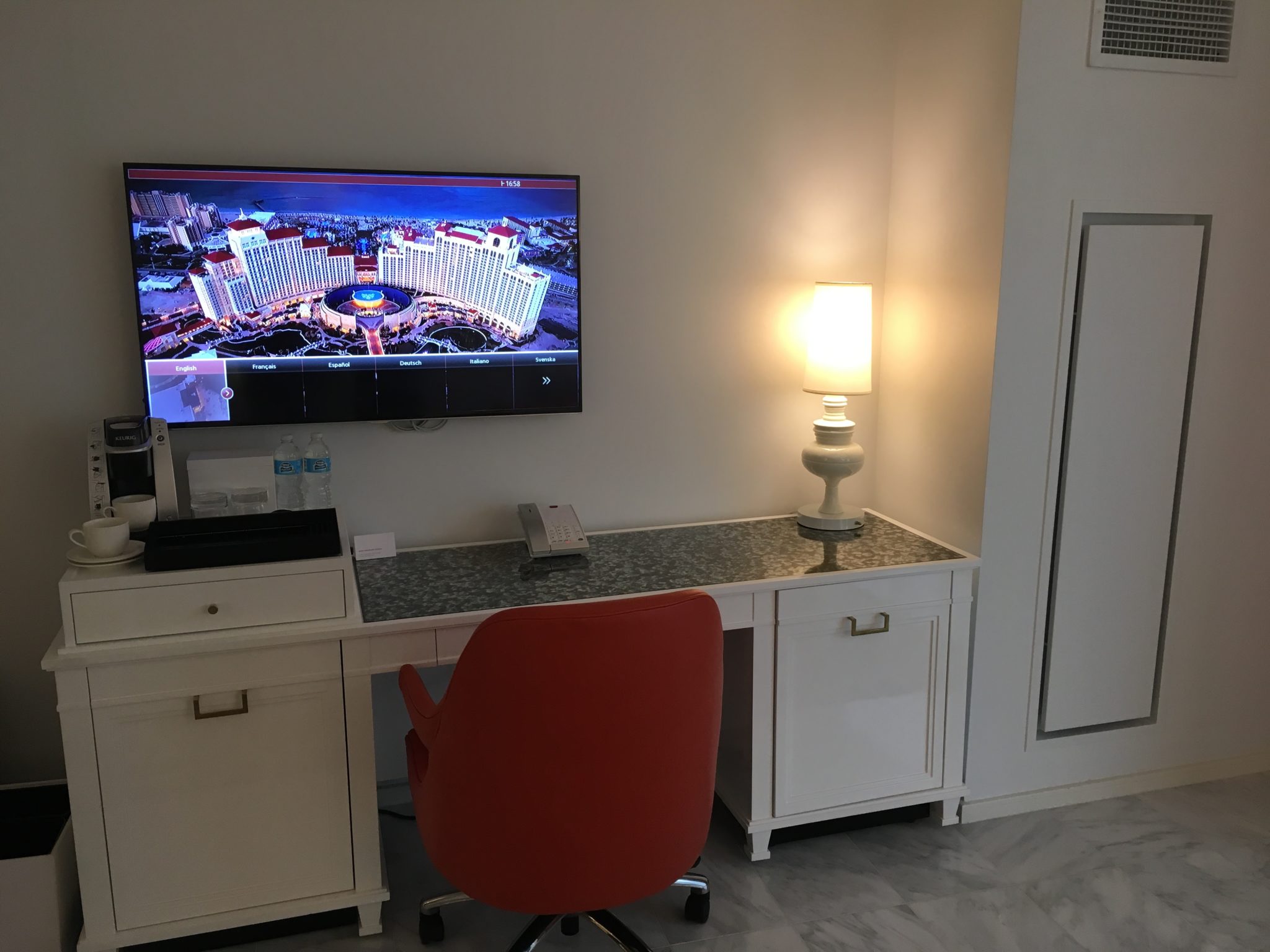 There was a mini-bar hidden inside the desk.  It was located and I couldn’t figure out how to open it – but there was no need to use it with access to the club lounge. 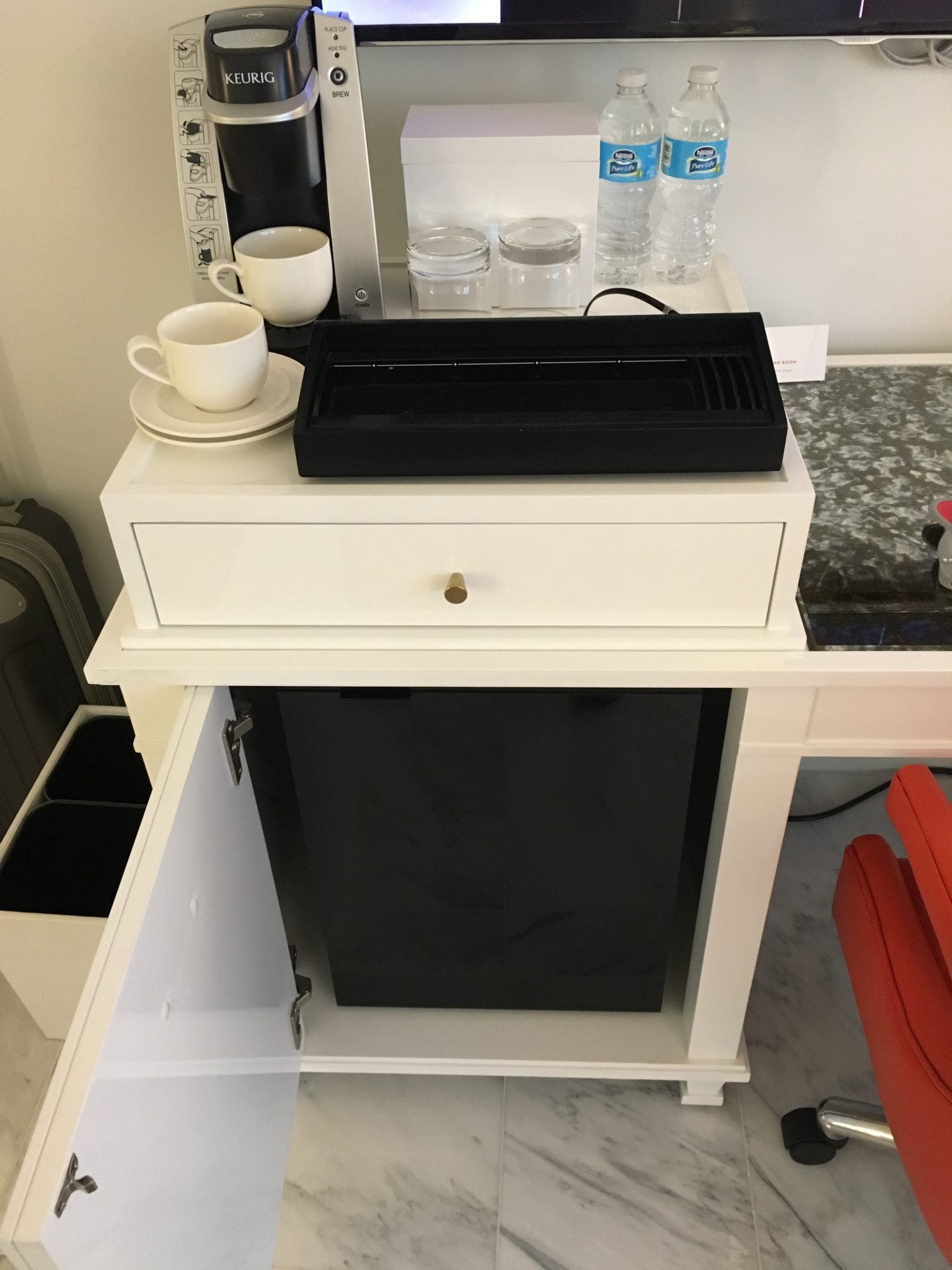 This power port on the desk is a great idea – unfortunately they ran out of outlets on this wall and it wasn’t plugged in.  We unplugged the coffee maker and plugged this port in so we could use it. 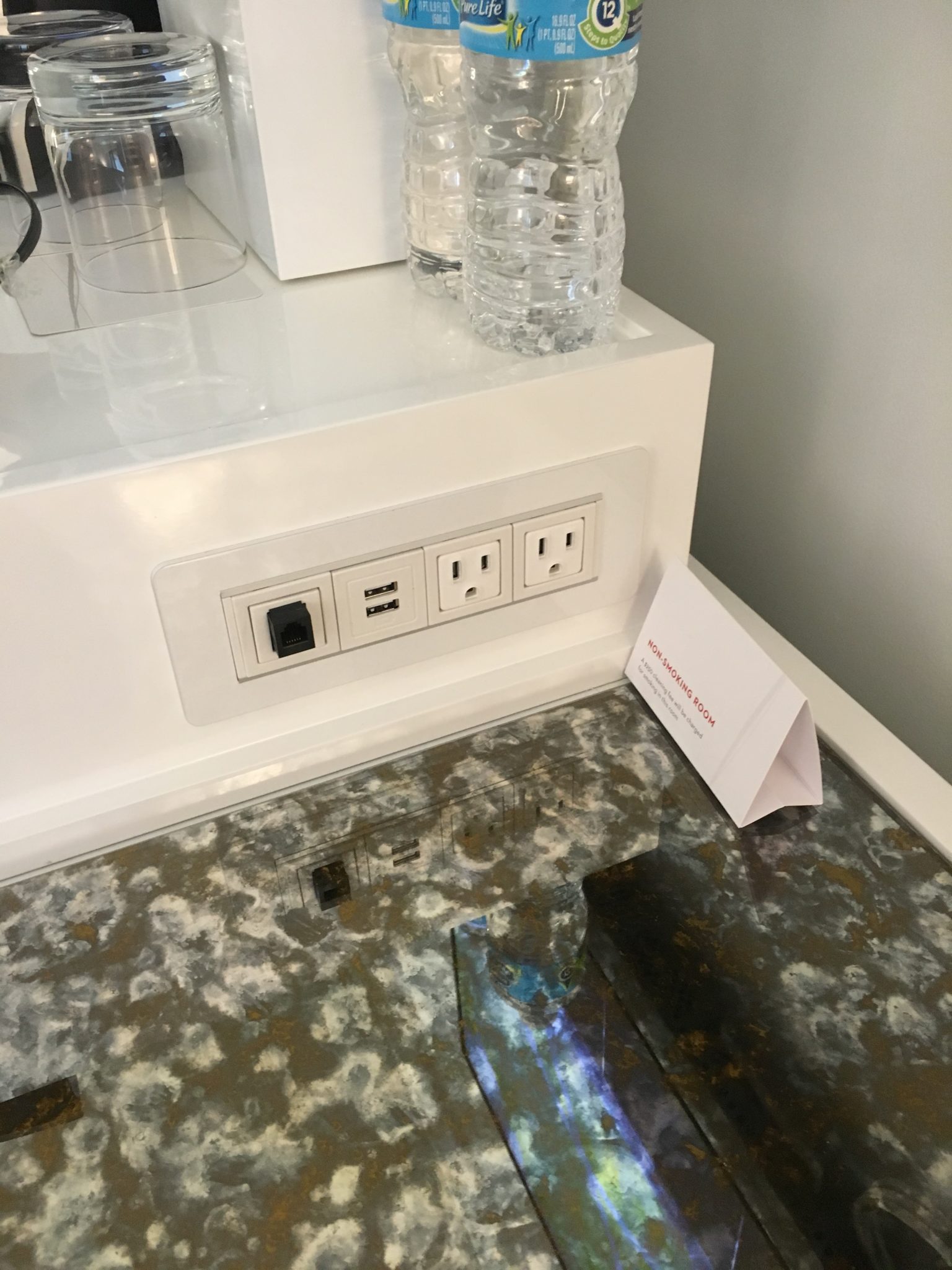 There was a set of sliding doors so the bathroom could be open to the room. 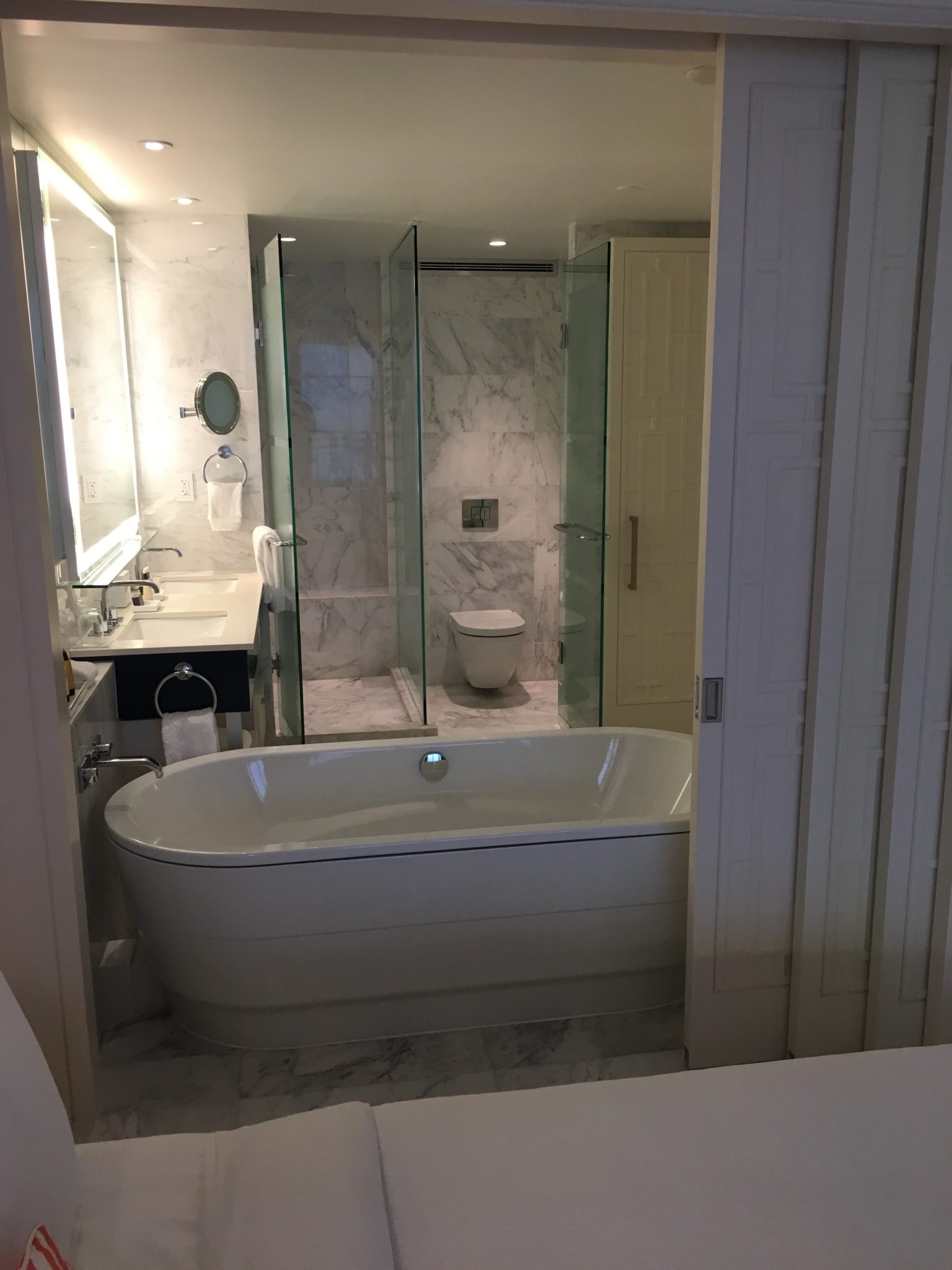 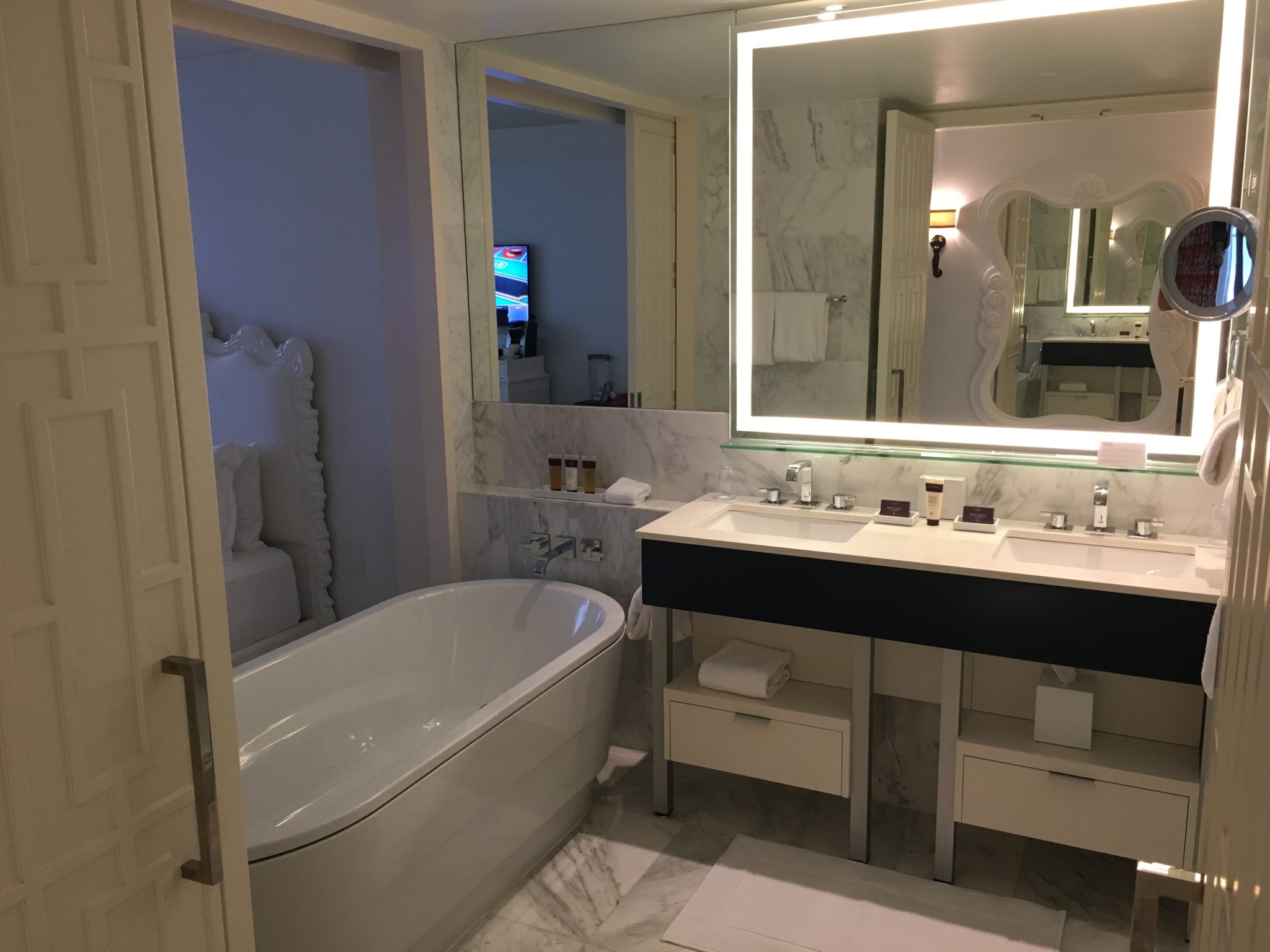 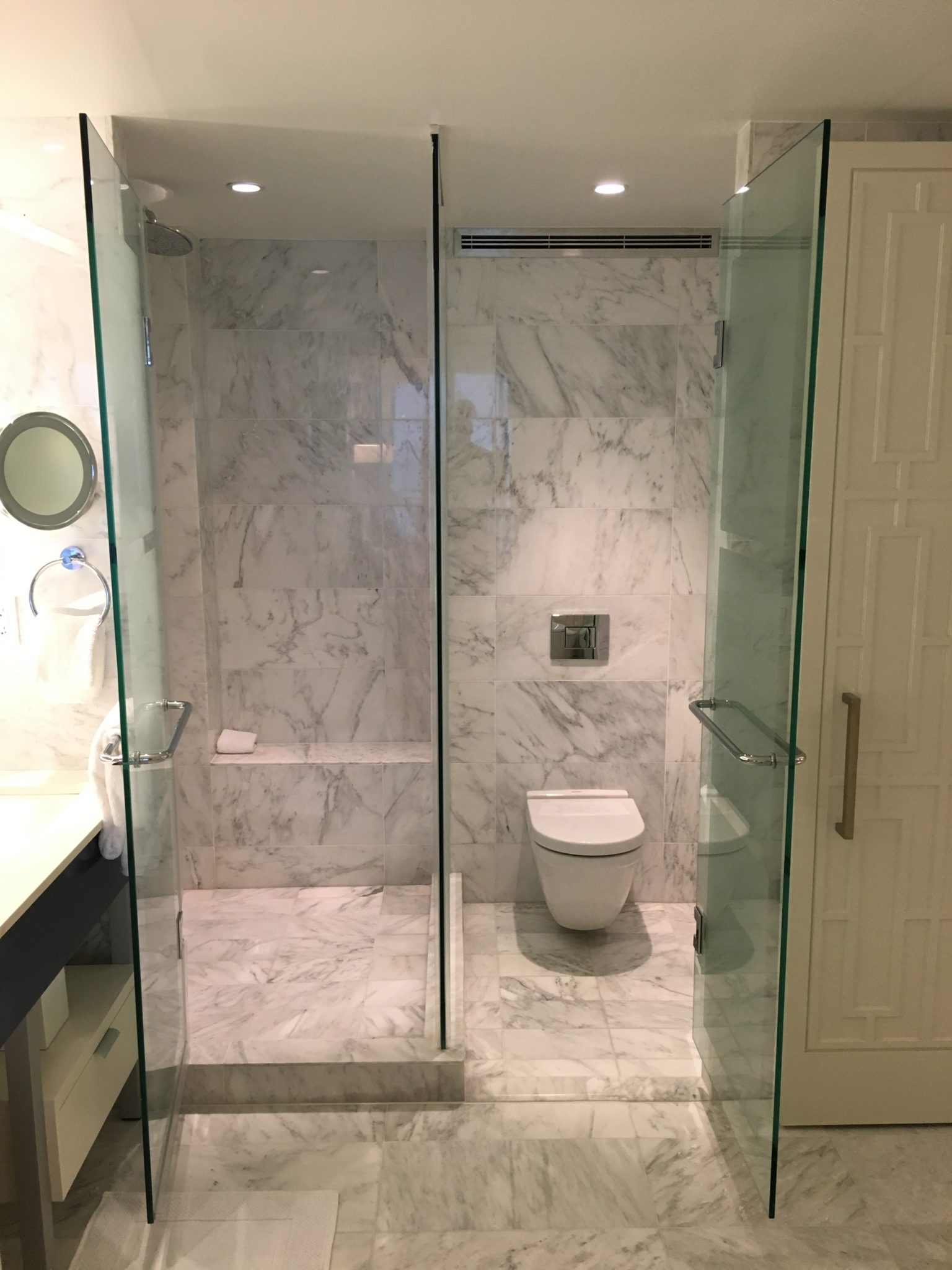 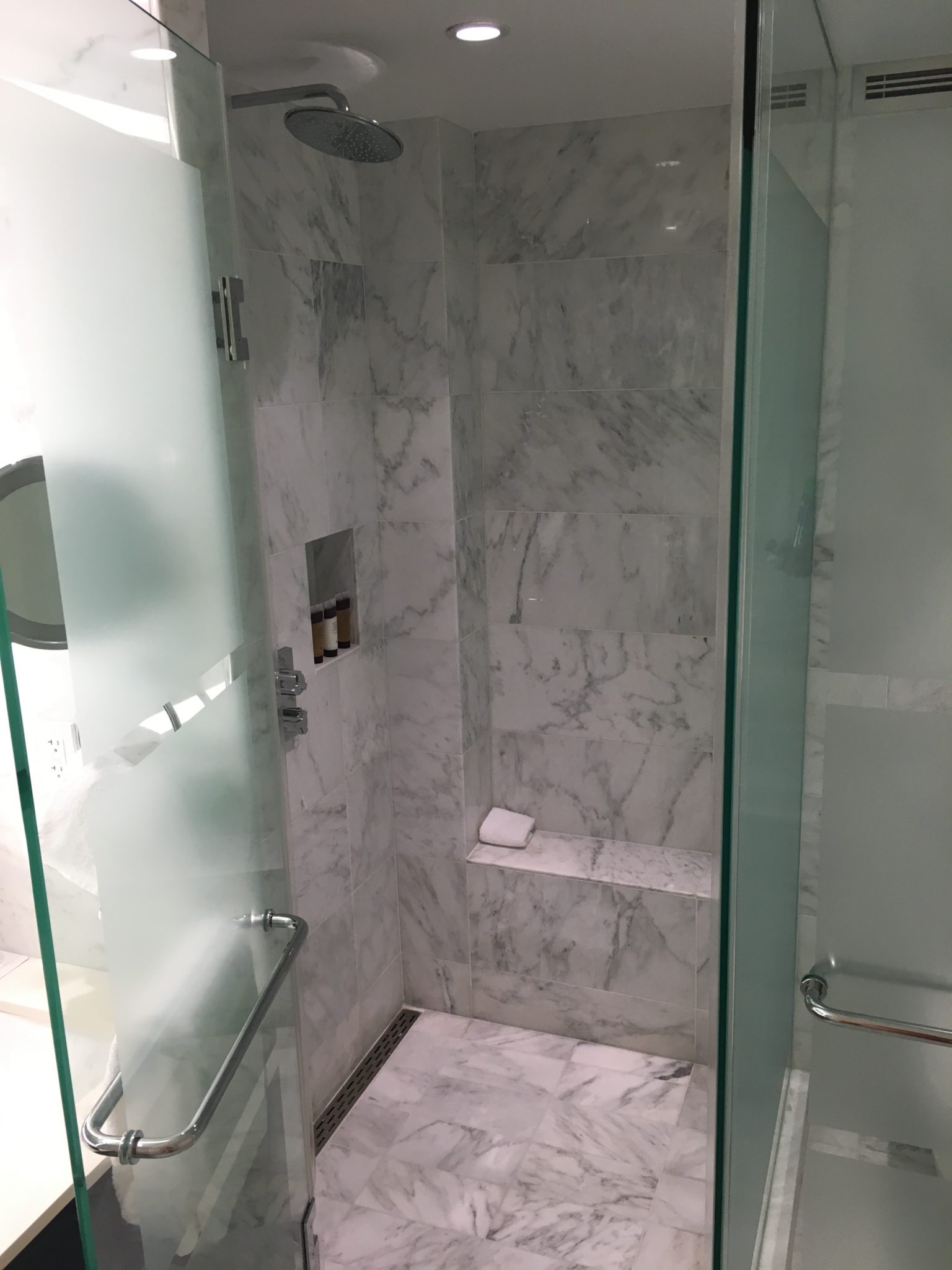 The shampoo/conditioner/body wash were ESPA and not the tiny bottles. 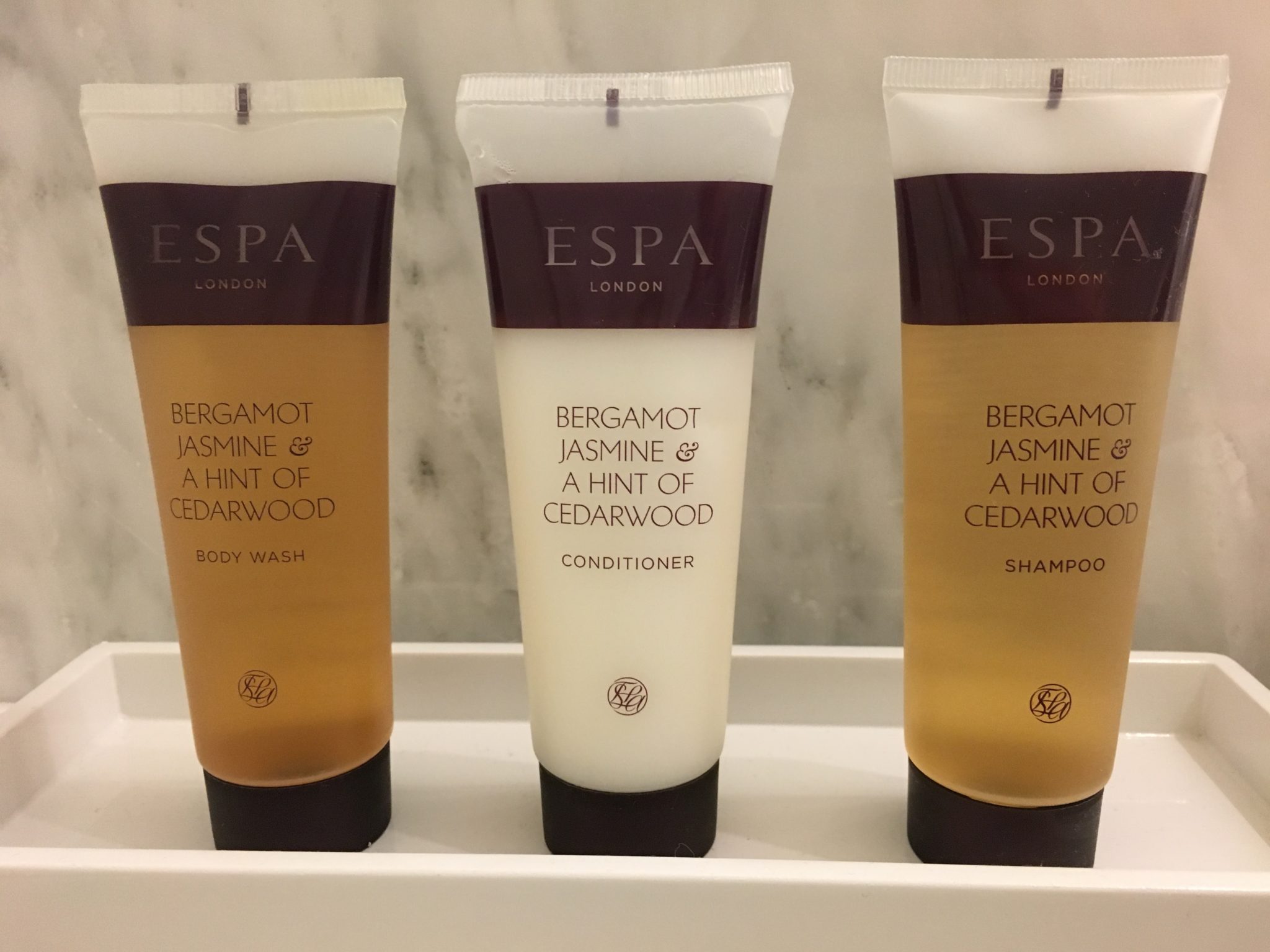 And finally our view from the Juliet balcony

Don’t forget to check out Part 2 (pools & grounds) and Part 3 (restaurants & club lounge) of the review. 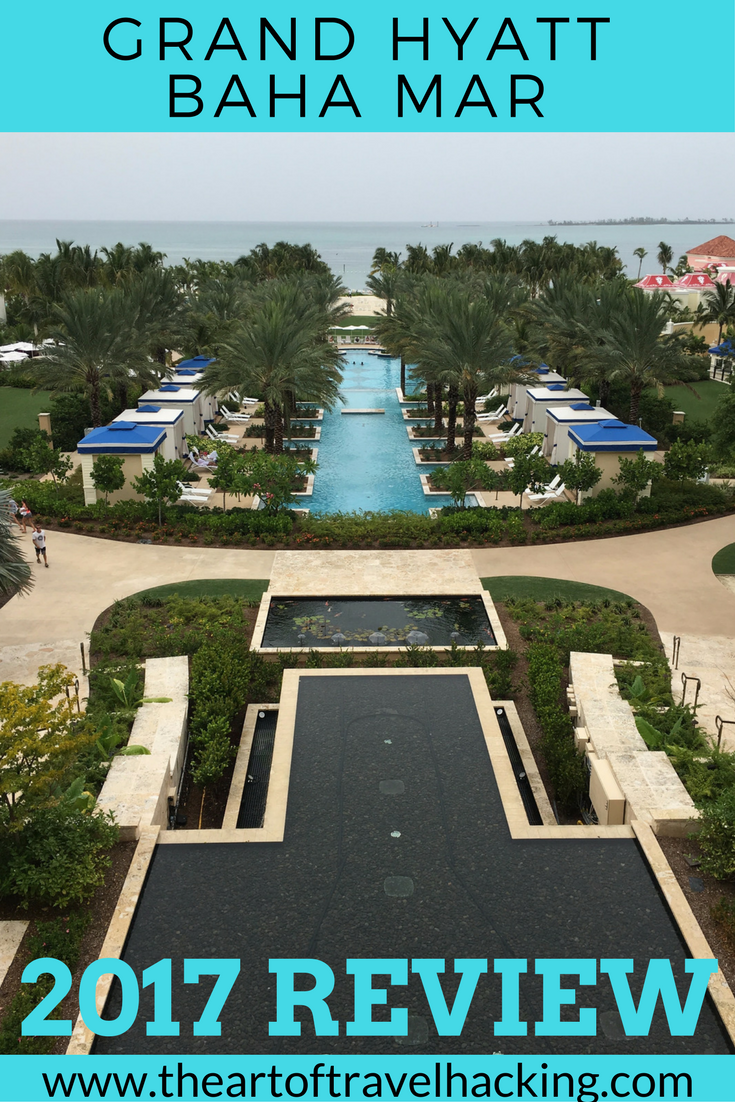